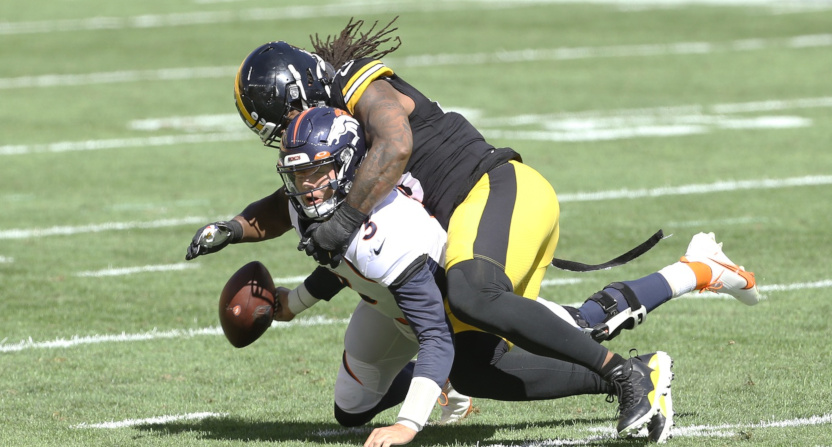 There were quite a lot of notable injuries in the early Week 2 NFL games Sunday, and one of those has turned into something that will see a starting quarterback out for at least a couple of weeks. That would be the shoulder injury to Drew Lock of the Broncos following a sack and forced fumble from the Steelers’ Bud Dupree (seen above). ESPN’s Adam Schefter later reported that injury as a “sprained AC”:

Broncos’ QB Drew Lock, who was in a sling after today’s loss to Pittsburgh, sprained his AC and is expected to be sidelined between 2-6 weeks, per me and @Jeff_Legwold. He will undergo an MRI on Monday to help determine extent of damage and how long he will miss.

When it comes to shoulder injuries, an “AC” reference is usually to the acromioclavicular joint, and it’s not an uncommon injury for football players. Here’s more from the ESPN story on that from Legwold and Schefter:

Lock sprained the AC joint in his right shoulder and is expected to be sidelined between 2-6 weeks, sources tell ESPN. Lock, who was in a sling after the 26-21 loss to the Pittsburgh Steelers, will undergo an MRI on Monday to help determine the extent of the damage and how long he will miss.

Lock left the game with just under eight minutes remaining in the first quarter against the Pittsburgh Steelers. Lock was sacked by Steelers linebacker Bud Dupree and fumbled on the play as he landed awkwardly on his right shoulder and arm.

Lock’s right shoulder was sagging slightly as he walked to the sideline. He was taken into the medical tent and stayed there during the next Pittsburgh possession, but was then taken to the locker room and Jeff Driskel took over behind center.

A 2-6 week timetable isn’t the worst thing in the world. But this is still a blow for the Broncos, who lost 26-21 to the Pittsburgh Steelers on the road Sunday and fell to 0-2. The question is where they go from here, and if that’s sticking with backup Jeff Driskel while Lock is out or making some other move at quarterback.

Lock only threw five passes before his injury Sunday, completing just one of those five (for 20 yards). Driskel did largely okay in relief, but was far from spectacular; he completed 18 of 34 passes (52.9 percent) for 256 yards with a touchdown and an interception. Of course, it’s tough to come in as a backup, and there may be some belief that Driskel will do better if he gets first-team reps in practice. But Driskel also doesn’t have a lot invested in him.

Driskel entered the NFL as a sixth-round pick of the San Francisco 49ers in 2016, following a college football career at Florida and then Louisiana Tech. He’s spent time with the 49ers, Cincinnati Bengals and Detroit Lions before joining the Broncos this offseason, but only has eight career NFL starts under his belt. In those starts, he posted 167 completions on 281 attempts (59.4 percent), for 1,688 yards with 10 touchdowns and six interceptions.

It’s certainly possible that the Broncos just stick with Driskel for a while, and in particular, that they see what he’s able to give them next week after a week of first-team reps. But the Lock injury is also interesting from the standpoint that the Broncos don’t have a ton necessarily invested in either him or Driskel. Lock was a second-round pick in 2019, and he was okay in five starts last year (100 completions on 156 attempts, 64.1 percent, 1,020 yards, seven touchdowns and three interceptions) and one this year (22 completions on 33 attempts, 66.7 percent, 218 yards, one touchdown and no interceptions), but he still has quite a bit to prove.

And Driskel hasn’t shown a ton to prove that he deserves a regular starting job to this point. Perhaps that changes if he does well in relief of Lock, or maybe the Broncos go with someone else (either third-stringer Brett Rypien or someone from outside) who does well themselves. Or perhaps Driskel does decently enough to keep the team afloat in Lock’s absence, but not well enough to claim the job himself, and we see Lock starting under center again when he returns from injury. In any case, there could be some interesting quarterbacking conversations ahead in Denver.