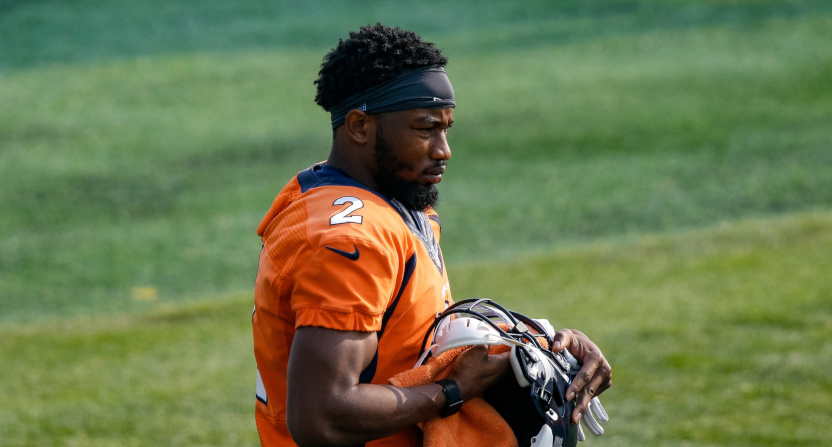 Broncos will not be forfeiting, per source.

Short of luring GM John Elway out of retirement, it sets up as the most unexpected NFL scene of 2020. Broncos have no QBs for a game against the Saints. https://t.co/ig4knEI9vQ

As per Mike Klis of Denver NBC affiliate 9 News (KUSA) offensive quality control coach Rob Calabrese (who played quarterback for UCF from 2008-2012) ran practice Saturday, but won’t be allowed to play Sunday. So this could get very weird, with the team perhaps even turning to wide receiver Kendall Hinton (seen above at training camp in August):

All three Broncos QBs have been ruled out. One possible QB: Kendall Hinton. He's on Broncos practice squad as WR but he was a three-year starting QB at Wake Forest. (Won't be coach Rob Calabrese. League won't allow, I'm told).

Benjamin Allbright of Broncos’ radio affiliate KOA 850 added to the reports about Hinton:

Per team source: Looking more and more like former Wake QB and current Broncos PS WRKendall Hinton will be Broncos QB tomorrow and NOT Royce Freeman per league source.

And NFL.com’s Ian Rapoport confirmed that Hinton will see time at QB:

#Broncos WR Kendall Hinton will play plenty at QB tomorrow, source said. 2020! He did play QB for a few years at Wake Forest.

Here are some of Hinton’s highlights from his freshman year at Wake Forest. (He missed time with an injury as a sophomore and was granted a medical redshirt, then served mostly as a backup for the next two years, then switched to receiver as a senior.)

Weirdly, this comes after Denver coach Vic Fangio was very confident earlier this week that his other QBs would be fine despite Driskel hitting that reserve/COVID-19 list. Here’s more from a DenverBroncos.com piece on that Thursday from Aric DiLalla:

Fangio said the Broncos would not need to place any other players on the Reserve/COVID-19 list because of contact tracing. The Broncos worked with the NFL beginning early Thursday morning to evaluate any potential close contacts.

“They have determined that nobody else is to go on the list, and they cleared us to practice,” Fangio said.

Asked specifically about Drew Lock and the team’s other quarterbacks, Fangio said those players were not deemed to be close contacts.

“No, the other quarterbacks were only on [the contact-tracing list] minimal amounts, like two minutes and some seconds, four minutes,” Fangio said. “That’s over a three- or four-day period. They thoroughly checked those guys that were on [there for] two minutes, three minutes, four minutes, and they came back and said nobody else needs to go on the list.”

It’s unclear what changed since Thursday to force this shift. At any rate, we’ll see what happens from here, but this certainly sets up an unusual situation. And it’s curious that there hasn’t been much discussion of moving this game, unlike Ravens-Steelers, which has already been moved twice (and may be moved again after the Ravens’ test numbers grew Saturday). At any rate, if they do play Sunday and do start Hinton, that will certainly be interesting to watch.