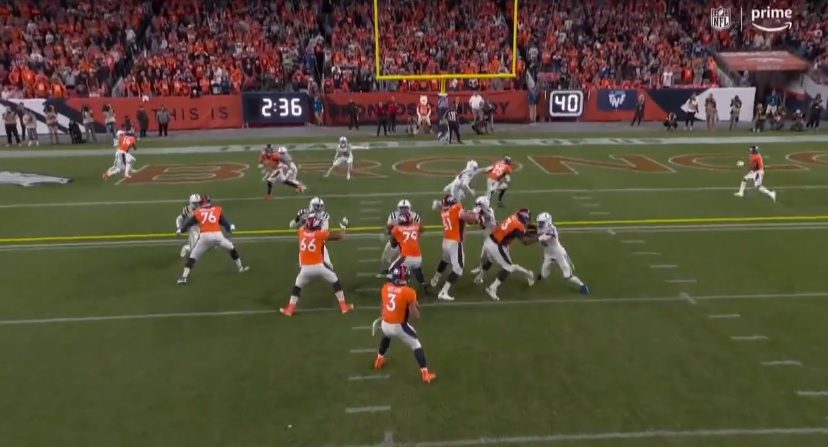 It briefly appeared as though the Denver Broncos fans who left Thursday night’s game against the Indianapolis Colts before the start of overtime would regret the decision. As it turned out, that was not the case. They prevented themselves from witnessing one final frustrating moment.

After the Colts kicked the go-ahead field goal on the first possession of overtime, the Broncos marched down the field and got in position to score when Russell Wilson connected with Melvin Gordon and Jerry Jeudy on passes for 24 and 37 yards, respectively. Gordon ran the ball on a third-and-two but was stopped a yard short of the first down. That left Denver and coach Nathaniel Hackett with a decision. Kick the short field goal to tie the game, or go for the win?

The Broncos went for the latter option. It did not pay off.

The decision to go for it was generally applauded. And while coach Hackett has been the target of a lot of well deserved criticism in his first five game’s as Denver’s head coach, the play could have worked. Only, Wilson wasn’t looking in the right direction.

Wilson locked in on Courtland Sutton early on. If he’d checked his other options, he might have noticed  K.J. Hamler running wide open on a slant route. Throwing the ball Hamler’s way would have likely produced a touchdown. Hamler said as much when the game was over.

#broncos WR K.J. Hamler to me on the final play of the game. “I could have walked in.”

At the very least, it would have been an easy first down for the Broncos.

The execution of the game’s final play was heavily criticized.

On 4th & 1 from the IND 6, Stephon Gilmore breaks up a Russell Wilson pass intended for Courtland Sutton to secure a Colts overtime win.

Going for the 4th-and-1 at the end of the game was a no brainer. You can't play for a tie on the goal line. But Wilson didn't make the play. Look how wide open Hamler is. Russell was awful again tonight. https://t.co/oh50zzWWUX.

The final play. There was a window to hit Hamler (1). pic.twitter.com/GJ3tznldlM

KJ Hamler looked to be very, very open on that final play pic.twitter.com/VU7uagx8dZ

Wilson’s tenure with the Broncos has not gotten off to a good start. And while there’s a lot of time to turn things around, the fans in Denver are clearly losing their patience with the team’s overall ineffectiveness on offense.