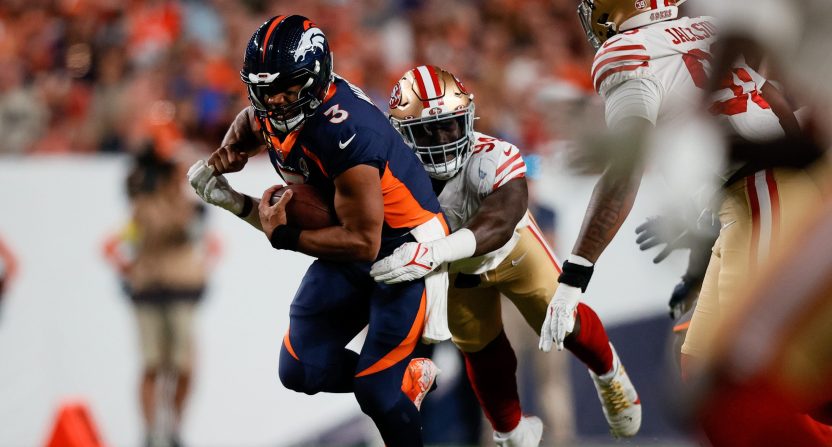 If there was any hope that the struggles that have plagued the Denver Broncos offensively for much of the first two weeks of the season, it didn’t come in the first half of Week 3’s game against the San Francisco 49ers.

Denver’s defense limited San Francisco to only one touchdown. That was the good news for the Broncos. The bad news was that they still trailed at halftime.

The first quarter was particularly bad, as Denver’s offense did not even pick up a first down until the final play. Things were a little better in the second quarter. The Broncos even managed a field goal. But even that was somewhat lucky. It was a 55-yard kick and had San Francisco coach Kyle Shanahan elected to accept a holding penalty and have Denver retry a third-and-long, the Broncos may not have even been in position to attempt that.

Ordinarily, these struggles could be attributed to either just an off night or the 49ers’ defense, which is one of the NFL’s best. But given that the Broncos struggled mightily through the first two weeks, NFL observers wondered through the first half when (or even if) Nathaniel Hackett and Russell Wilson are going to begin getting this offense moving.

The Broncos are getting their plays off in time. They're just not gaining any yards.

Maybe the Broncos should call Ryan Nassib to show Russ how to run this offense pic.twitter.com/CC3CKJyUkl

I thought Russell Wilson was supposed to make the Broncos better? They look like the same offense we've been seeing for years: continuously showing no fight.

Denver offense doesn’t even look close to figuring things out.

I know it’s only 3 gms, but Wilson and this Broncos offense looks AWFUL.

The Broncos still have time to get things going offensively. But they haven’t earned the benefit of the doubt this season and if things don’t get better, the frustration will only get bigger.