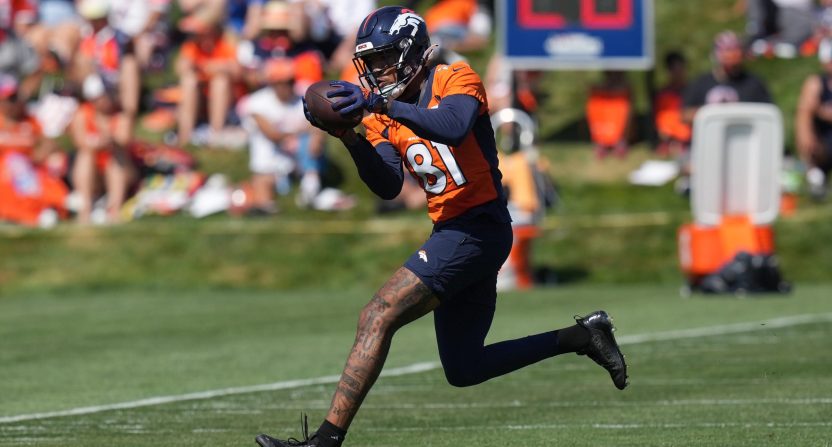 The AFC West looks like it will be one of the most competitive divisions in all of football this upcoming season, and much of that is due to the Denver Broncos’ newest addition, quarterback Russell Wilson.

Unfortunately for Wilson, one of his top receivers appears to have gone down with a serious injury at Broncos training camp.

Fourth-year receiver Tim Patrick was carted off the field on Tuesday after making a catch and falling down while attempting to make a move after the catch.

Tim Patrick is getting carted off the field at Broncos camp after twisting his leg coming down from a crazy leaping catch. The entire team is huddled around him as he gets loaded onto the cart. Just brutal.

He was helped to the locker room where he reportedly struggled to put any weight on his right leg, which is never a good sign.

Tim Patrick was helped into the building after being taken off the field via cart. Favoring the right leg. Was trying to put weight on it. A palpable pall cast over #BroncosCamp.

It is reportedly a non-contact injury to Patrick’s right knee, which is usually an early indicator of severe injury such as an ACL tear.

Patrick is set to undergo an MRI on his knee, but it doesn’t seem like there is too much optimism around the Broncos organization that it will be a good diagnosis for him.

Broncos head coach Nathaniel Hackett discussed the injury after practice and what Patrick’s diagnosis process will look like in the coming days.

“Right now, we are going to get the MRIs,” said Hackett to the media on Tuesday. “I don’t know how good it is going to be but we will let you guys know as soon as we can. A guy like Tim who is such an amazing leader, he has done everything we’ve asked, It breaks your heart.”

Broncos head coach Nathaniel Hackett discusses the Tim Patrick injury. Doesn’t confirm anything, but dives into how tough it was to watch and other guys needing to step up. The other guy with a knee injury today was RB Damarea Crockett. #BroncosCountry pic.twitter.com/x5BTksy0ef

Patrick is coming off a year where he was arguably the best receiver for the Broncos, racking up 734 receiving yards and five touchdowns in 2021. He signed a 3-year $34 million extension this offseason with the Broncos, so the team very clearly saw him as a building block of their team for years to come.

Hopefully this injury is not a season-ending one and he is back on the field for the team at some point this season, but spirits around the Broncos organization certainly appear to be low at the moment.