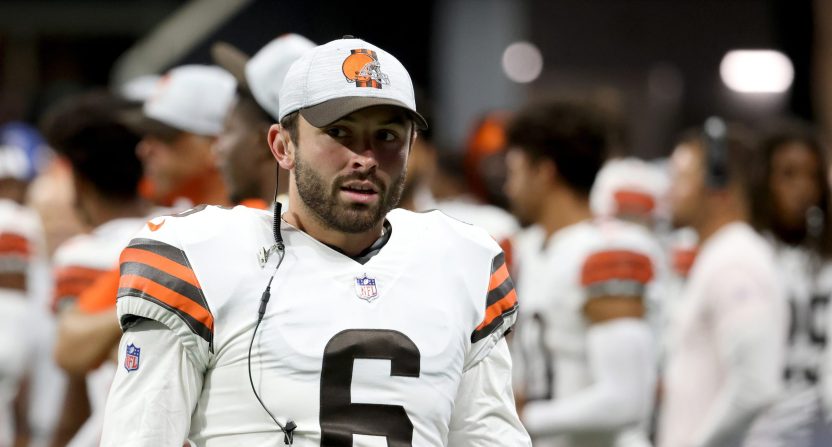 The Cleveland Browns have had quite the NFL offseason but no change will be bigger than at their quarterback spot. Former starter Baker Mayfield is out and awaiting a trade while the team gets ready for new starter Deshaun Watson.

Along with tons of athletic skills, Watson also brings a lot of disturbing allegations with him. There’s a strong possibility that, despite any criminal charges being brought against him, the NFL will suspend Watson for a portion of this upcoming season. If that’s the case, the team will need a solid Plan B while he’s unavailable.

One of the prevailing theories is that the Browns might keep Mayfield around as a failsafe option if Watson is suspended for the entire season. However, according to Mary Kay Cabot of Cleveland.com, the franchise has a different quarterback in mind if this happens.

I think the chances of that are very slim,” said Kay Cabot, when asked if Mayfield might play for the Browns this season. “For starters, I think the Browns will find a trade partner for Mayfield before training camp even if they have to pay part of his $18.86 million salary. I think some team will be smart enough to trade for Mayfield, who can still help a team and represents an upgrade over a handful of current starters in the NFL.

“But if for some reason Mayfield is still hanging around at the start of the season, he won’t start for Watson if he’s suspended. That job will go to No. 2 quarterback Jacoby Brissett, who’s been here working in the offseason program and developing timing with his new teammates.”

She does note that if Brissett were to get injured, the Browns would, in theory, have to choose between Mayfield and Josh Dobbs. However, she fully expects Cleveland to part ways with Mayfield before that becomes an issue.