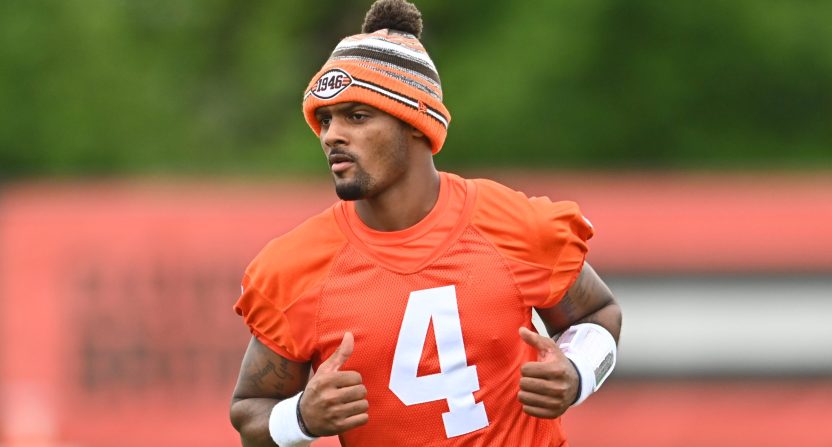 Watson has since settled with 23 of his 24 accusers and has been issued a six-game suspension that will be final unless the NFL wins their appeal to potentially extend Watson’s suspension for the whole season.

The criticism for Watson has been non-stop, and there is now even more criticism towards both Watson and the Cleveland Browns. This time it comes from other NFL teams about the contract that Watson signed back in March.

NBC Sport’s Peter King reported last week that an “influential NFL person” told him that teams around the league are upset with the Browns “rigging” Watson’s contract so he will only miss out on a fraction of his pay in 2022 due to his suspension.

“One influential NFL person told me on this trip that it doesn’t sit well with the league or 31 other owners that the Browns rigged the Watson contract so that his suspension would cause him to lose only a fraction of his 2022 compensation,” said King.

Their gripe with the contract seems to be that the team paid Watson an $8.9 million signing bonus for the 2022 season which will not be deducted with the suspension, while only paying him a little over $1 million in base pay.

Due to this, Watson will only lose out on $345,000 next season if his suspension duration remains the same, which is minuscule compared to the $46 million he is set to make in base pay for the 2023-24 NFL season.

The Browns likely anticipated some sort of suspension and wanted to make sure Watson lost out on the least amount of money as possible while the suspension played out.

It is certainly a smart decision from both the Browns and Watson’s agent, but the morality of the situation is definitely questionable, and others are now justifiably calling both sides out on this decision.