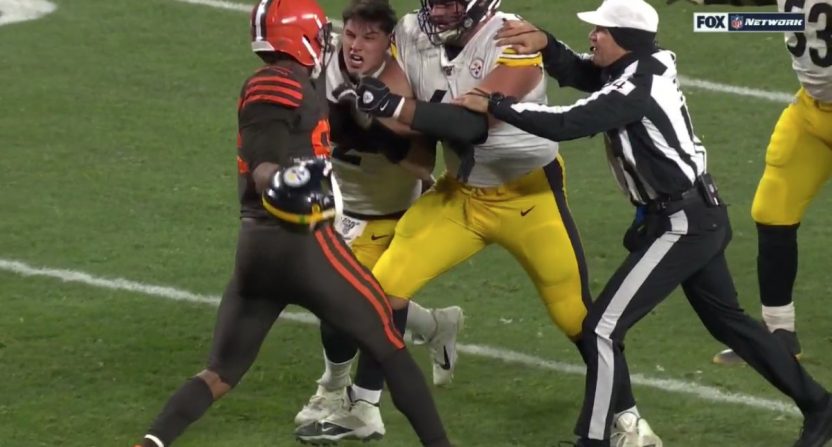 Injuries, missed field goals, turnovers, and a massive fight that had multiple ejections plague this game as the Cleveland Browns defeated the Pittsburgh Steelers 21-7 in Cleveland.

The first half was all Cleveland. After a four and out that gained zero yards, the Browns marched down the field on their first offensive drive to get the TD. A long-range pass to Odell Beckham Jr. almost broke the plane but after being ruled down on review, Baker Mayfield picked up the TD.

Midway through the second quarter, Mayfield would throw to Jarvis Landry to make it 14-0 entering halftime.

The Steelers would eventually score in the third quarter but it would be misleading to say that they got that score themselves. In the Steelers’ 87 yard TD drive, the Browns defense gave up 70 yards in penalties. One such penalty involved Damarious Randall getting ejected for a helmet-to-helmet hit that was so hard, Diontae Johnson was bleeding from his ear.

In addition to Johnson, four other Steeler players were injured and had to leave the game. Artie Burns and James Conner had knee and shoulder injuries respectively and concussions caused Ola Adeniyi and Juju Smith-Schuster to not return.

JOE SCHOBERT WITH HIS SECOND PICK OF THE NIGHT 😮 @TheSchoGoesOn53 pic.twitter.com/rzb1YWOobk

The Browns put the exclamation point on their victory in the fourth quarter. Mayfield kept the play alive and darted a pass to the back of the end zone toward Stephen Carlson, who made an incredible play to make the catch (his first career catch) and the final touchdown for the winners.

.@BakerMayfield extends the play and finds Stephen Carlson in the end zone!#Browns lead 21-7.

Myles Garrett swings helmet then gets stomped on by the Steelers wow pic.twitter.com/kDl8ThEe67

The end of the game was marred by a massive fight involving Myles Garrett. He sacked Mason Rudolph and then in the tussle, Garrett ripped Rudolph’s helmet off and used the helmet to hit Rudolph in the head. Once that happened, two Steelers players took down Garrett and started punching and kicking him.

Three players were ejected including Garrett and Larry Ogunjobi of the Browns as well as Maurkice Pouncey of the Steelers. Honestly, a disappointing end to a disappointing game where neither team really deserved what they got. Other than maybe some lengthy suspensions.