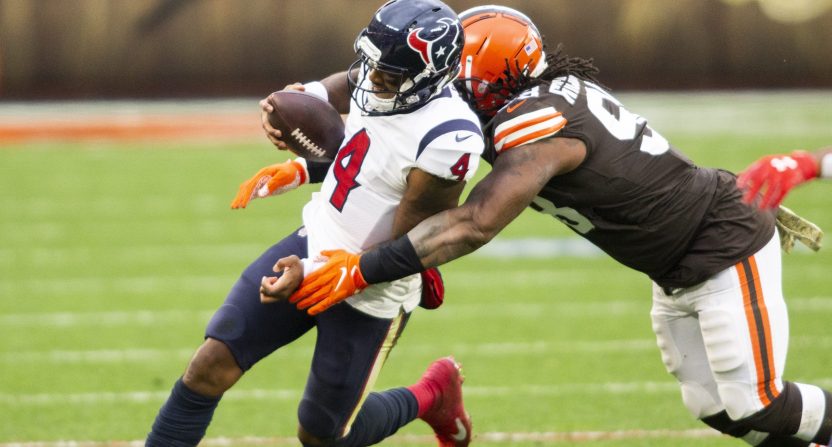 On Sunday, the Cleveland Browns officially announced that they had traded with the Houston Texans to acquire quarterback Deshaun Watson. The team also issued a sprawling statement to explain why they felt so comfortable giving up tons of draft picks to align themselves with someone who is facing 22 civil lawsuits regarding sexual assault and harassment.

“We are acutely aware and empathetic to the highly personal sentiments expressed about this decision,” Browns owners Jimmy and Dee Haslam said in the statement. “Our team’s comprehensive evaluation process was of utmost importance due to the sensitive nature of his situation and the complex factors involved. We also understand there are still some legal proceedings that are ongoing and we will respect due process.

“It was pivotal that we, along with Andrew Berry and Kevin Stefanski, meet with Deshaun to have a straightforward dialogue, discuss our priorities, and hear directly from him on how he wants to approach his career on and off the field. He was humble, sincere, and candid. In our conversations, Deshaun detailed his commitment to leading our team; he understands and embraces the hard work needed to build his name both in the community and on the field. … We are confident in Deshaun and excited about moving forward with him as our quarterback and supporting his genuine and determined efforts.”

“We have done extensive investigative, legal, and reference work over the past several months to provide us with the appropriate information needed to make an informed decision about pursuing him and moving forward with him as our quarterback,” Browns general manager Andrew Berry said in a statement. “Deshaun has been among the very best at the position and he understands the work needed to re-establish himself on and off the field in Cleveland. We are confident that he will make positive contributions to our team and community as we support his return to football.”

However, not only did the Browns not reveal any details about their “extensive” investigation into Watson but they also did not speak to any of the 22 women who filed civil lawsuits against him, per their attorney. That aspect threw a lot of doubt on the “extensive” nature of their work and caused a lot of people around the NFL world to react accordingly, especially when they took into account the way the Browns structured Watson’s contract.

Y’all should have kept this saved in drafts. https://t.co/dxsQx9inQT

Just say “we want to win” and move on. Nobody believes this rhetoric. https://t.co/R00hxIlUoM

Or you could just not give a quarter of a billion dollars to a guy accused of sexual assault by 22 women. Your choice! https://t.co/qy84L7XYc3

Could have saved keystrokes, time—and dignity—by simply writing the truth:

“He can REALLY throw a football, and ultimately in this business that’s all that matters.” https://t.co/2Xbp0M23in

It’s already hard enough to be a fan of this violent and exploitative sport, requiring mental gymnastics to justify a lifetime of fandom, but I can’t imagine how tough it is to be a fan of the Browns right now. An extremely upsetting decision by the team. https://t.co/wle0ioFW3b

What do you guys hate to read more, legalese or PR speak? https://t.co/j9tDzpP9Ln

They made his salary for next year $1mm, so that when he is inevitably suspended by the league he will only lose a fraction of the guaranteed $230mm in his deal. This statement is, to use a technical legal term, utter horseshit. https://t.co/aS4NwVxv4J

If you had only included one more adjective or adverb, I would have believed you https://t.co/rHbPXRygRn

It’s going to be a particularly unfortunate situation for many Browns fans next season as they’ll find themselves needing to decide how badly they want to root for a quarterback like Deshaun Watson, especially if Cleveland is able to win more games because of him.