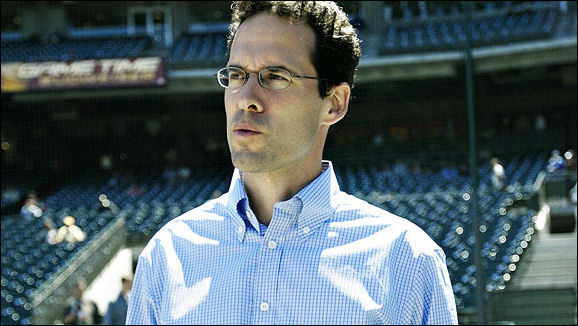 The Cleveland Browns are at it again, doing another potentially silly thing that will likely earn them scorn for one reason or another. On Tuesday, the Browns announced that they had hired Paul DePodesta as their new chief strategy officer. While this may not seem like much of a thing on the surface, keep in mind that DePodesta isn’t exactly a football guy. In fact, he’s worked with the New York Mets since 2010 and has worked in baseball since 1996.

That’s right – the organization that we felt was too bad to be compared to a dumpster fire just hired a baseball executive with 20 years of experience for a front office position on the heels of promoting their general counsel (Sashi Brown) to the position of VP of football operations.

The Browns said plenty of nice things about DePodesta and his role in a statement.

“We are fortunate to bring in Paul, an extremely talented, highly respected sports executive who will add a critical dimension to our front office,” said Haslam. “His approach and ambition to find the best pathways for organizational success transcend one specific sport and his experience as a high level sports executive make him a terrific addition to the Cleveland Browns.

“While we are excited about what Paul will provide our organization, we remain fully focused on the critical task of identifying the right head coach and a top talent evaluator who will provide the football expertise needed to be successful.”

“Paul has invaluable experience in management and leadership with a number of highly successful sports teams,” said Executive Vice President of Football Operations Sashi Brown. “His ability to create better processes and systems throughout organizations, his use of data as a tool to produce better outcomes, and his relentless focus on looking for innovative ways to create more success will be a strong asset as we look to be as comprehensive as possible in our decision making.

“Additionally, Paul will help members of our player development, high performance and analytics departments maximize their efforts. There are many areas that we have not fully capitalized on that will enhance the growth and performance of our players over time.”

Shorter version: “hey, he’s done a lot of good stuff in baseball, so he should be able to do some good things in football as well, right?”

DePodesta’s statement was much shorter and to the point.

“Cleveland and football have always held a special place in my heart,” said DePodesta. “It was 20 years ago this month, after pursing my first love of football and looking at every possible job in the NFL, that I got the biggest break I could imagine – a job offer from the American League Champion Cleveland Indians. As excited as I was then, I am even more excited now to return to Cleveland and to try to help the Browns.

“My focus is to bring whatever experience and perspective I can to collaborate with the team, with the intent of helping us make more informed and successful decisions. Admittedly, there will be an awful lot for me to learn, but I want nothing more than to help bring consistent, championship caliber football back to Cleveland and Browns fans and I look forward to starting right away.”

“I got my first job in baseball 20 years ago in this city, and now I’m back in a different sport!”

Also, note that DePodesta admits he has a lot to learn. I’m sure Browns fans won’t be judgmental about that at all.

DePodesta was also kind of/sort of portrayed by Jonah Hill in the movie Moneyball, which focused on the Oakland Athletics and their thrifty ways to build a winning team.

I’m just curious as to whether or not DePodesta will try to convince the Browns to sign someone who’s never played quarterback as their new starting quarterback.