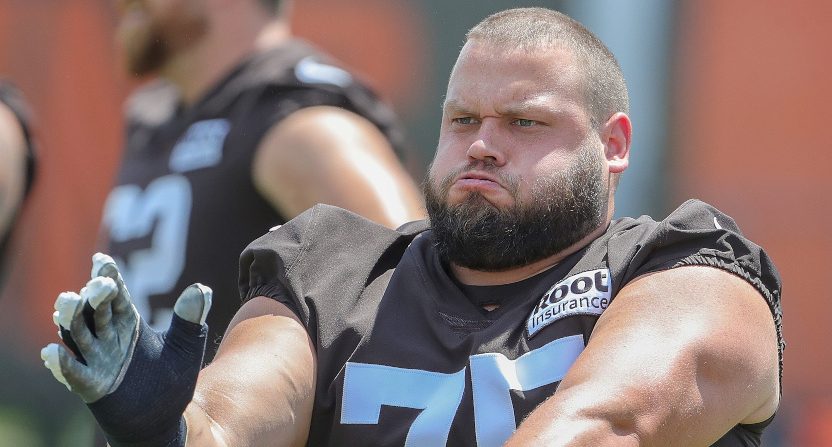 Deshaun Watson’s trade to and then signing in Cleveland amidst widespread accusation of sexual misconduct during his time with the Houston Texans (which he’s facing NFL punishment for)  has been quite controversial. Some Browns‘ fans have renounced the team over that move, but others have been rather supportive.

However, Watson looks set for quite a critical reception elsewhere. The boos he received during the Browns’ first preseason game against the Jacksonville Jaguars Thursday are an indication of that. And one of the men protecting him, left guard Joel Bitonio, spoke out about that this weekend, saying he expects further boos for the team this year.

“It seems like more than ever, [it’s] Cleveland against the world, so we’ll be ready for it,’’ Bitonio (seen above in camp on July 28) said during his podium interview Saturday.

On Thursday, Watson played a few series with the first-team offense. The moment he stepped on the field, fans in attendance made sure to let him hear it. In one video, a group of fans at TIAA Stadium in Jacksonville chanted “You sick f–k” when the Browns were on offense.

That wasn’t the only time fans booed Watson. Every time he stepped on the field, the veteran signal-caller was hearing the crowd.

Deshaun Watson was getting boo'd anytime he was on the field 😳

It seems likely Watson expected to receive a negative reaction from opposing fans while he’s still dealing with a sensitive and controversial case. Former U.S. district judge Sue Robinson handed down a six-game suspension for Watson over sexual misconduct accusations, which stem from numerous allegations of inappropriate conduct with multiple massage therapists. The NFL appealed the ruling soon after, seeking a harsher punishment for the Browns QB.

Some reports claim the league is seeking a year-long suspension from the gridiron, along with a massive financial hit to Watson’s bank account.

Prior to taking the field on Friday, Watson apologized to all the women he has “impacted” over the issue.

“I’m truly sorry to all the women that I’ve impacted in this situation,” Watson said. “(There are) decisions that I made in my life that put me in this position, I would definitely like to have back.”

While we wait and see what happens, it seems like wherever he plays outside the Cleveland Metro area, Watson will be entering an unwelcoming environment.

[Cleveland.com; photo from The Akron Beacon-Journal, via USA Today Sports]