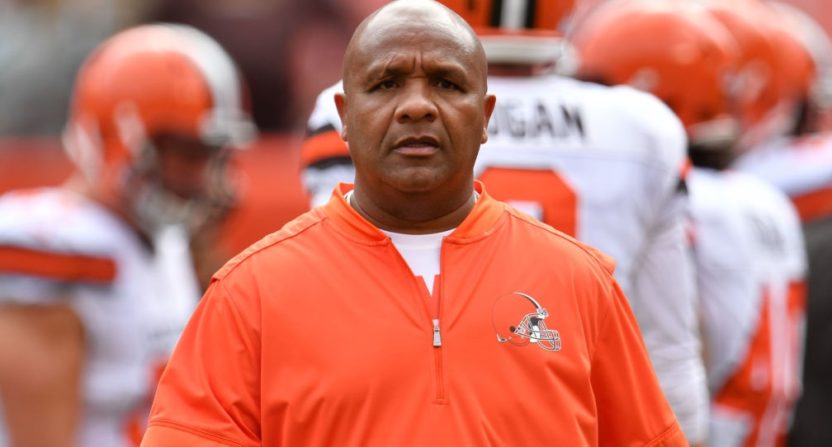 There’s often a lot of secrecy around who a NFL team plans to pick in the first round, but having the general manager keep that secret from his own head coach seems both a little silly and extremely in character for the Cleveland Browns.

According to an on-air report from ESPN’s Chris Mortensen, Cleveland general manager John Dorsey has known who he plans to pick first overall for around six weeks, but only told owners Jimmy and Dee Haslam a month ago and only told head coach Hue Jackson this week:

“John Dorsey, the new general manager of the Cleveland Browns, he knew who he was going to pick, I’d say, about six weeks ago. He told his owners, Jimmy and Dee Haslam, about a month ago. He finally told his head coach, Hue Jackson, two days ago. Nobody else in the personnel department, nobody else on the coaching staff.”

Look, there’s some logic to ensuring that planned pick doesn’t get out, especially in the situation that’s played out in 2018. The Browns hold the first and fourth overall picks, and while they’re likely taking a quarterback with one of those, there isn’t a particular consensus on which quarterback is the best option. Some favor Josh Allen’s big arm but poor stats, while others favor the proven production of the likes of Baker Mayfield, Sam Darnold and Josh Rosen. And especially given the possible case of a trade with one or both of those picks, the Browns really don’t want other teams to know which quarterback they favor.

If another team is desperate to get a particular quarterback, it makes sense for Cleveland to try and push them into trading for the first overall pick, even if the Browns wouldn’t have chosen that quarterback there. So some secrecy makes sense, and it makes sense even to not necessarily tell everyone in your organization. People leak things for all sorts of reasons, and expanding the circle of who knows increases the chances someone will leak to some media member. But keeping a decision like this from your head coach, and not discussing it with him until days before the draft, seems rather dysfunctional.

Whatever quarterback the Browns pick (presuming they take one) is going to have to fit into Jackson’s offensive scheme, so his input appears somewhat important. Of course, the final decision isn’t his to make, especially as he’s on shaky ground after consecutive 1-15 and 0-16 seasons and with a new GM who didn’t initially hire him. But knowing his thoughts would seem valuable, and it would also seem valuable for him to know what direction the GM is going and start perhaps revising his playbooks to emphasize the talents of whichever quarterback they’re going to get. There also isn’t really a great argument for keeping him out of the loop. Yes, the more people who know a secret, the more likely it is to leak, but surely Jackson can be trusted to obey a strict “tell no one” order. And if he can’t, why did the Browns retain him as head coach?

There’s a whole different debate to be had about if it’s wise to be so firm on a pick so early on, which might not be the wisest strategy when you have six more weeks to further evaluate the options. But if you are going to be firm in who you’re picking, why on earth would you not extend that information to at least the head coach? If you think he’ll violate orders to not leak it, he shouldn’t be your head coach, and even if the information does somehow leak, it’s possible to at least somewhat counter that with different rumors.

And then the really funny part of this is letting it get out to a media member that you’ve known this decision for months and haven’t told your head coach. That makes the Browns seem even more dysfunctional than normal, makes Jackson’s job seem even more in question, and raises questions about how Dorsey is doing his own job before he even makes the pick. Of all the Cleveland Browns in the world, they’re still the Cleveland Brownsiest.