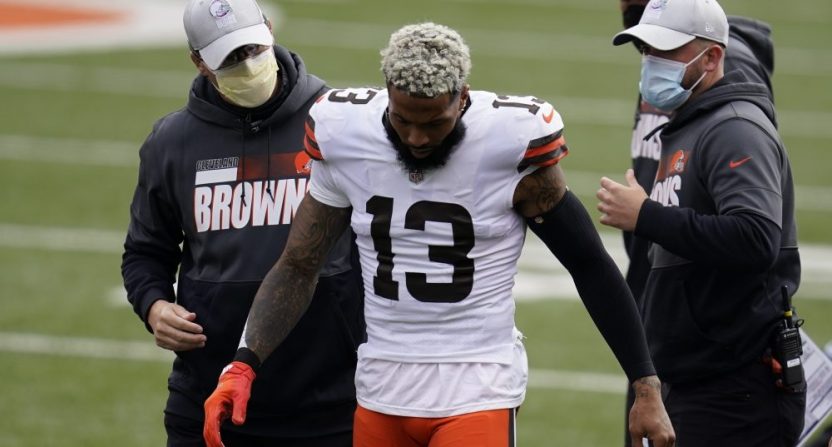 The Cleveland Browns are contending for a playoff spot in the AFC, but those chances suffered a huge blow with news that receiver Odell Beckham Jr. is lost for the season.

Odell Beckham Jr just text me that his ACL is torn and that his season is over.

According to reporter Josina Anderson (most recently of ESPN), Beckham texted her to say that he tore the ACL in his left knee during Week 7’s win over the Cincinnati Bengals. The tear was confirmed Monday morning with an MRI exam.

Beckham suffered the injury on the second play of the game trying to tackle Cincinnati’s Darius Phillips after he intercepted Baker Mayfield.

Odell Beckham's knee injury. His left foot being pointed inward might have saved him here from a bad injury, but we'll see. ACL tears swell up quite fast and exam is fairly reliable, so I'd say its a good sign he's at least questionable pic.twitter.com/DMP1Uu2ByP

With the season-ending injury, the Browns lose their second-leading receiver. Beckham had 23 catches for 319 yards and three touchdowns in seven games. He also compiled three rushes for 72 yards and one touchdown.

Following the game, Mayfield said he felt guilty for the interception, admitting he underthrew Beckham which allowed Phillips to pick off the pass.

“I am probably going to beat myself up about that one for a long time,” said Mayfield. “He is a guy who fights for this team, and in doing that, he got hurt. Prayers and hopes for the best. That one sucks.”

Mayfield also said that Beckham told him to “go be great” at halftime. The Browns quarterback ended up throwing three touchdowns in the fourth quarter (and five overall), leading Cleveland to its fourth win of the season. At 4-2, the Browns are currently third in the AFC North behind the Steelers and Ravens. A division title might be out of reach, but they’re in contention for a wild-card playoff spot.

In two seasons with the Browns, Beckham has 97 receptions for 1,354 yards and seven touchdowns in 23 games. Three years remain on a five-year, $90 million contract he signed during the 2018 season while still with the New York Giants. According to Spotrac, $12.8 million of his 2021 salary is guaranteed for injury.