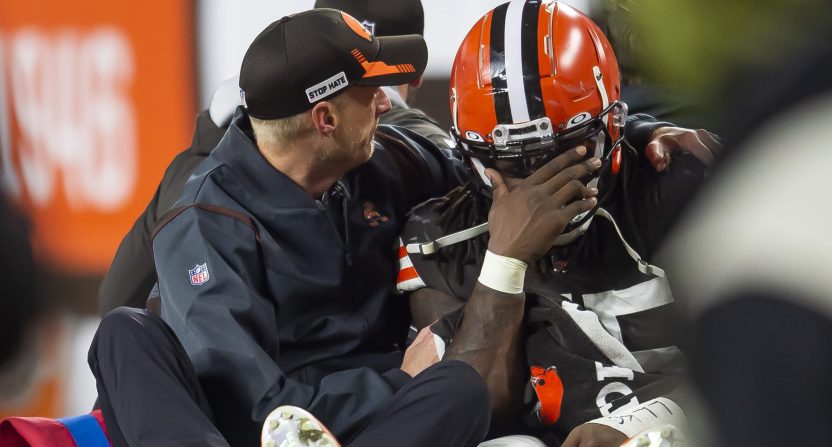 The Cleveland Browns lost to the Las Vegas Raiders 16-14 on Monday night, but the repercussions of the game might be felt in the loss of one of their best pass rushers.

According to Ian Rapoport, Takk McKinley is assumed to have torn his Achilles. The 26-year-old will have to undergo an MRI on Tuesday to determine if it’s true. If so, his 2021 season will be done and it will likely impact when he can return in 2022 if he remains with the team.

#Browns pass-rusher Takk McKinley is feared to have suffered a torn Achilles, source said. He’ll have an MRI in the morning to determine if that is the case.

Early in the third quarter, McKinley came up limp on a play and was seen holding onto his ankle as trainers tended to him. He was escorted off the field on a cart and was seen crying as they drove towards the tunnel. He was ruled out for the rest of the game after that.

McKinley was in his first season with the Browns, coming over from the Atlanta Falcons after four seasons. In ten games this season, with one start, he recorded 2.5 sacks, a forced fumble, and 18 total tackles. The real shame is that McKinley signed with the Browns on a one-year deal, which means he won’t get a further chance to prove himself worthy of a bigger deal in the future.

There was certainly a strong reaction to the injury on Twitter amongst NFL folks.

Worst part of this loss was watching Takk sobbing on the cart. A “my season is over” sob. https://t.co/AMfc6m7njD

I feel awful for Takk McKinley…

#Browns Myles Garrett said he told Takk McKinley as he was being carted off the field to stay optimistic and that they love him and have his back.

It’s been a disappointing season overall in Cleveland and this injury is just another disappointment to add to the ever-growing list of issues.