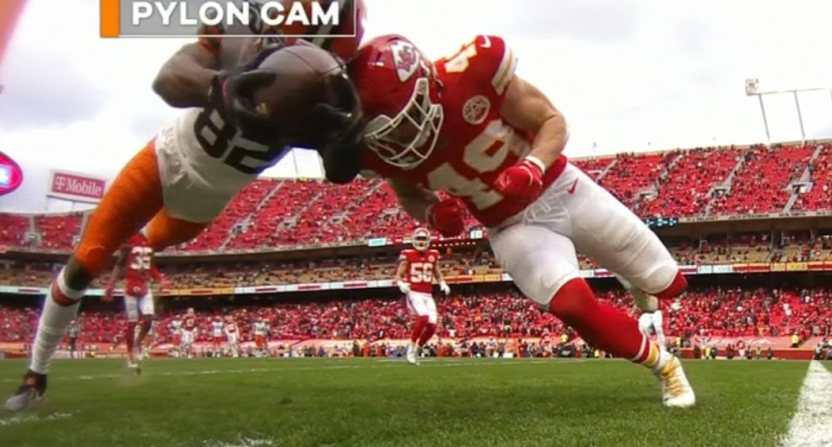 The Chiefs took a 19-3 lead into halftime against the Browns in Kansas City, but if not for one very important play the game might have been a lot closer.

Trailing 16-3 and set to get the ball first out of halftime, Cleveland was driving under the two-minute warning when Baker Mayfield connected with Rashard Higgins. Higgins attempted to dive for the end zone, when he was hit by Daniel Sorensen, fumbling the ball past the pylon and out of bounds.

That resulted in the Chiefs taking possession with a touchback, which is just about the dumbest rule in the NFL. There are multiple ways around it that would be more reasonable, and even if a perfect solution isn’t available, the league continues to let perfect get in the way of basic logical steps to fix a dumb part of the game.

Not watching the game but still getting a pretty good sense of how it's going pic.twitter.com/fWjue0oWrG

But, hey, a rule is a rule, and while it was very much on-brand for the Browns to fall victim to that in that moment, there’s not much that could have been done to help. The other part of the play, though, was very much avoidable: Sorensen clearly lowered his helmet and should have been called for targeting on the play, which is how he forced the fumble.

So we're just gonna ignore this. Got it. pic.twitter.com/fnbLdrvCZ3

It is illegal to lower the head and initiate contact with any part of the helmet to any part of the opponent's body. This is a foul. There is no way the covering official working the goal line is going to see that. Another official needed to get it. https://t.co/mZaaPlAjsl

CBS rules expert Gene Steratore noted on the broadcast that it should have been flagged, which would have negated the turnover and given the Browns the ball on the goal line. Instead, Patrick Mahomes took the gift and capitalized, leading Kansas City to field goal range where Harrison Butker converted heading into halftime.

That’s an incredibly pivotal moment in the game, and barring a Browns comeback in the second half, it’s probably going to be added to the list of painful Cleveland playoff moments. (And for the sake of fairness and an entertaining game for neutral fans, let’s hope Cleveland does come back.)