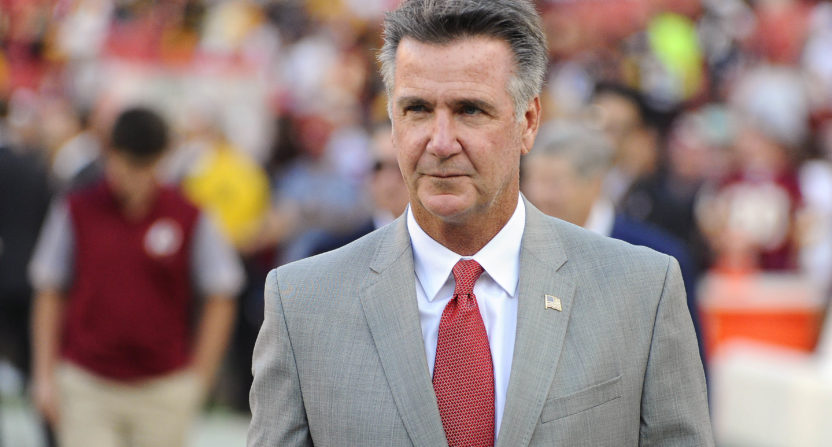 The Washington Redskins have been perennial underachievers ever since Dan Snyder bought the team. And while it’s not difficult to figure out why that is, Team President Bruce Allen peeled back a very big layer that really explains a lot about why the Redskins haven’t been successful in recent years.

In talking to the media about new QB Alex Smith, Allen was abnormally high on Smith’s win/loss record and how Smith is one of three quarterbacks who have had 50 wins over the past five years. Allen said, “His statistics are easy to see. There’s three quarterbacks [Tom Brady and Russell Wilson] who have 50 wins in the last five years. It doesn’t take a rocket scientist to figure out that might be the type of guy you want on your football team.”

I think Alex Smith is great. I feel he’s gotten a raw deal in San Francisco and Kansas City by people who didn’t appreciate how great of a quarterback he was while there. That doesn’t mean I think he’s the third best quarterback in the NFL. Depending on how you measure it, Alex Smith can arguably rank from first to fourth when it comes to best quarterbacks within the NFC East, much less the NFL.

When pressed about whether wins or losses is the most important statistic, Allen elaborated that it’s the case and it’s not just the quarterback who should be judged on wins/losses.

“And so for you, are wins and losses the most important statistic when it comes to the quarterback position?” NBC Sports Washington’s JP Finlay asked Allen.

“Wins and losses is the most important statistic when it comes to an equipment manager, a team president, a quarterback, a running back, a guard or a coach,” Allen responded. “Yes.”

Wins and losses is important within reason but for crying out loud, if that’s the most important metric, Nick Foles is now the greatest quarterback currently in the NFL because he’s the most recent person to win a Super Bowl. Nothing against Nick Foles, the man is talented, but he’s not the best current quarterback in the NFL.

Also, Bruce Allen should be the last person to say people should be judged on wins and losses. Has Allen had amnesia over the past eight years? Honestly, does Bruce Allen realize that he is below .500 as a general manager and team president in Washington since 2010 (52-75-1)? If we’re going off of Allen’s logic, he should’ve been fired years ago.

This is the problem with using wins/losses to solely judge how good or bad someone is. Sure, Alex Smith is just one of three quarterbacks to have 50 wins over the past five years but if I were to go off of his playoff record, I would think that being 2-5 in the playoffs wouldn’t be worth all that the Redskins traded in order to get him.

At some point, you do have to win in order to save your job. So in that aspect, Allen’s statement has some merit. But that cannot be the end all, be all and other statistics must be measured along with wins and losses, especially for a team sport like football. Not even Tom Brady could save the Cleveland Browns last season. He could be the greatest quarterback ever combined with Jesus and probably only be able to make the Browns 6-10. That’s not Brady’s fault.

Alex Smith is a great quarterback but he’s great because he’s a smart QB who doesn’t force his passes, limits his mistakes and prioritizes completions over making big plays. It might not be the sexiest style of play out there but that works and with that comes the wins. That’s what the Redskins are hoping to see out of him.