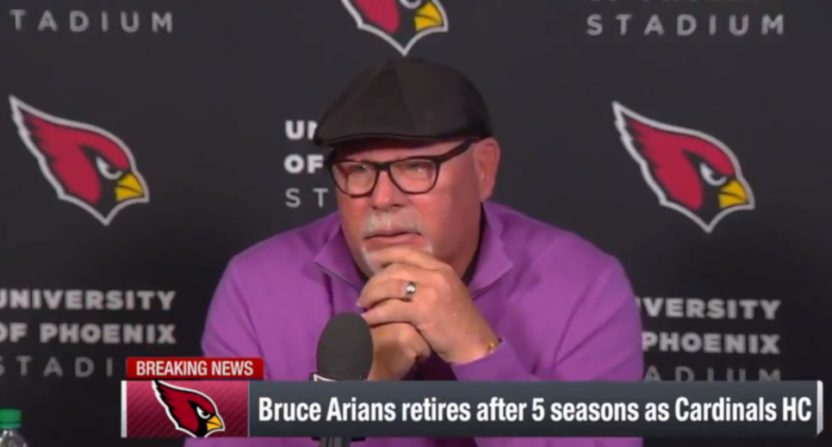 It’s been quite the year for Bruce Arians. In late December 2017, reports of him leaving the Arizona Cardinals started to surface, with Arians at first calling those a “fake news story” and saying “I don’t know where all that shit came from” on Dec. 26. Less than a week later, on Jan. 1, he officially retired, and within the month, he made it clear he was looking for a TV job, auditioning for Fox, NFL Network and CBS.

Arians then was reported as heading to CBS as a game analyst in late April (a move officially announced in May). In August, AA’s Shlomo Sprung asked him if he’d consider other coaching jobs if they came up, and Arians responded “No, I’m done.” He went on to a pretty successful season in the broadcast booth alongside Greg Gumbel and Trent Green, making headlines for blunt remarks like Jesse James being “wide-ass open” and Derek Carr making “decisions that just make you go ‘What the flip!,’ you know what I mean.” But after just a year in the booth, Arians is now returning to the sidelines.

Both ESPN’s Adam Schefter and NFL Network’s Ian Rapoport reported Tuesday evening that the Tampa Bay Buccaneers have signed a deal to make Arians their new head coach. It’s interesting to see Arians take another coaching job, though, as beyond those August comments, his tearful retirement press conference last January seemed to indicate he was done coaching. Especially with its focus on his desire to spend more time with his family:

An emotional Bruce Arians announces his retirement as head coach of the @AZCardinals.#BeRedSeeRed pic.twitter.com/JQqWXNFEOx

“There would be reasons, family’s a big one.” However, that conference also included Arians saying “I will miss the game” and “I probably didn’t truly know [he’d retire] until that kick went through” (in the team’s final game the day before this), so it does sound like he was wavering a bit. And people can change their minds, and maybe Arians found he missed the game even more than he expected; after all, he’d been coaching for 42 years at this point, and it can be tough to move away from something that’s such a big part of your life. A television job let him stay a bit in contact with the NFL, but maybe that wasn’t enough, especially with a team wanting to bring him in as head coach.  (And “NFL head coach” presumably pays more than “mid-tier CBS analyst in a three-man booth.”)

How well will this work out for the Buccaneers? Well, Arians has had a fair bit of success over the years, winning two Super Bowls as an assistant coach with the Steelers, finding significant success as the interim coach of the Colts in 2012 after Chuck Pagano’s leukemia diagnosis (he went 9-3 there and was named NFL Coach of the Year), and then going 49-30-1 in five seasons with the Cardinals (and earning another NFL Coach of the Year award in 2014). He took Arizona to the playoffs twice, and got them all the way to the NFC championship game in 2015.

But Arians is 66 now, and his last two seasons saw his team go 7-8-1 and 8-8, so it’s not a certainty that this will all work out (especially considering that the Buccaneers went 5-11 this year and have plenty of concerns, including at quarterback, where Jameis Winston was benched after ineffective play). We’ll see what he’s able to do in Tampa. At any rate, he won’t be in the CBS booth this year.

1 thought on “Bruce Arians has left CBS for a NFL return with the Bucs, five months after saying “No, I’m done” when asked about coaching jobs”