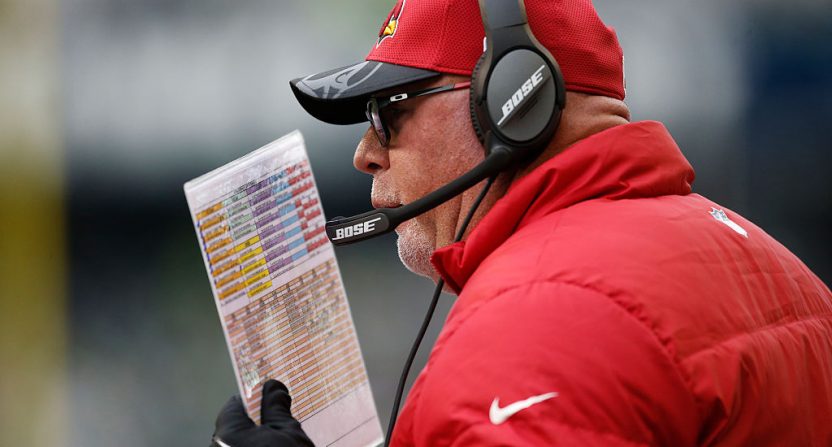 It’s NFL Draft season, which has scouts and football analysts scouting the field of college football players entering the draft to figure out just who will or will not be a fit at the next level. As previous years have shown, a handful of college football programs tend to have players ready for the next level far more regularly than others. Not every school can be playing a pro-style offense with players destined to be playing on Sundays, so other programs have to resort to what some may call a gimmicky offense that goes all in with an up-tempo style, or passes the ball at will, or relies entirely on the option, be it the read option or the triple option.

To put it simply, college football coaches are paid to win games at their universities and not prepare players for the NFL, and they will use whatever style of offense that will win games and championships.

Arizona Cardinals head coach Bruce Arians knows his coaching style would probably be different if he were coaching at the college level. In an interview on Pro Football Talk Live, Arians explained he would embrace an up-tempo offensive style that is rarely used successfully in the NFL (See: Chip Kelly, Philadelphia Eagles).

“If I was a college coach, I would do the same thing,” Arians said on PFT Live. “I’d be an up-tempo, fast-break guy, spread them out. Because you have a great athlete who is going to out-athlete everybody, and that’s how you win the national championship. You out-athlete.”

Arians also made note that the rules in college football restrict what you can and cannot do with organizing a game plan compared to the NFL, including the number of hours you have to work with the players each week leading up to a game.

“I would coach it that way because of the 20-hour rule and the limited time they actually have with the guys on the field,” Arians said. “They’re passing some new rules that will help them. We’re drafting offensive linemen who have never been in a three-point stance. And (NFL fans) want them to play because he’s a first-round pick. We didn’t draft him for this year. We drafted him for next year. But they don’t understand that.”

Arians is not saying fans are dummies (well, not directly, at least), but making more of a point that players coming out of the college ranks, regardless of their stature and rank at their respective positions, may not be fully ready to play at the next level because they may not be ready to play the kind of style that is used in the NFL after playing a completely different style in college for the previous three to four years.

Are there perks to having a good number of players going off to the NFL from your college program? Absolutely. For example, Alabama has used it as a great recruiting tool by showing off just how many players from coached by Nick Saban have gone on to play at the next level…

The #Process begins at THE University of Alabama! #BuiltByBama #RollTide pic.twitter.com/luQtxrlvAr

And sometimes those former players even come back to practice with the team!

It is no secret that the more successful you are on the field, the more likely it is you may have players ready to play in the NFL at some point. But college football coaches are not there to prepare you for the NFL first. It will surely be used as a recruiting pitch to the top-level recruits, and there is no doubt some college coaches will have their best players ready for the next level, but these coaches are paid the big bucks to win college football games. If some players happen to go on to the NFL, that is a great footnote.