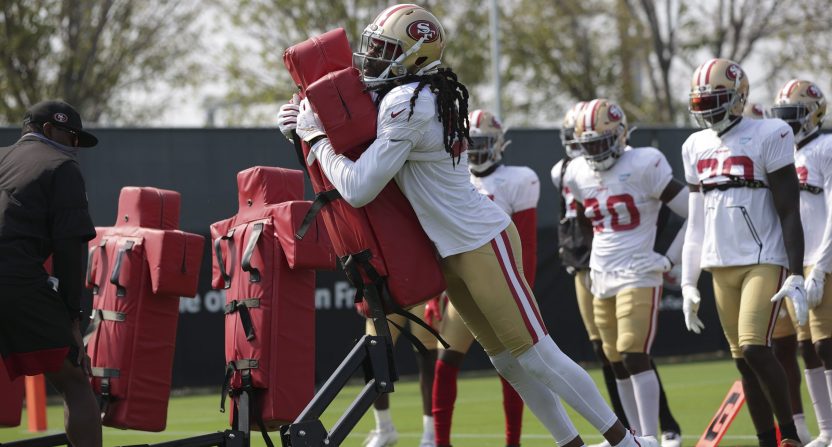 At 2-0, the Tampa Bay Buccaneers are 2-0 and look like they’re well on their way to defending their Super Bowl crown. However, that doesn’t mean there isn’t room to improve and shore up their weaknesses.

While Tom Brady seems like he’s in full command of the offense (and might be until he’s 50), the defense certainly could use some help, especially with last week’s loss of cornerback Sean Murphy-Bunting. So it should come as no surprise to learn that, according to head coach Bruce Arians, the Bucs have reached out to free-agent cornerback Richard Sherman to see if he’s interested in joining the team.

The Buccaneers need to fill the space left by Murphy-Bunting, who also appears in their nickel package. He’ll be out for an indefinite amount of time while he mends from a dislocated right elbow suffered in week one against the Dallas Cowboys. Since he’s on the IR, he’ll have to miss at least three games, but the Bucs don’t currently have an idea when he’ll be back.

The team’s other starting CB,  Carlton Davis, suffered a mild hamstring strain in practice but did play against the Falcons this past weekend.

The 33-year-old Sherman would certainly bring a ton of experience with him to a very young backfield. The five-time Pro Bowl and All-Pro corner would also provide some strong tackling ability, something that has been lacking in that department for the Bucs’ secondary.

However, Sherman is also dealing with some legal issues off the field that need to be sorted. An arrest in July led to him being charged with five misdemeanors, including two counts of domestic violence. He has pled not guilty and apologized for the incident. Before that in February, King County obtained an “extreme risk protection order” for Sherman, which bars him from owning guns after it was deemed he posed a danger to himself and others.

Tampa is certainly not the only team talking to Sherman, but if the Pro-Bowler wants to find a place to put a cap on his potentially Hall-of-Fame career, he’d be hard-pressed to find a better situation than joining the defending champs led by Tom Brady.