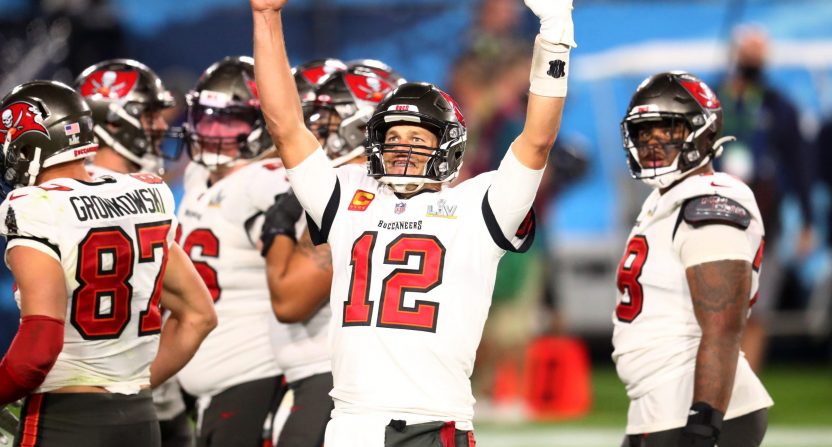 If there were any lingering doubts about Tom Brady’s legacy as the greatest, even after winning six championships, that was put to rest at Super Bowl LV. Now with the Buccaneers, Brady replicated his Patriots magic and led the Bucs to their second Super Bowl title and Brady’s seventh in his 21-year career. Brady now has more Super Bowl trophies than every team in their history, breaking a tie with the Patriots and the Steelers.

Brady was also voted MVP. Rob Gronkowski and his two TD catches was a good option as well but in the end, Brady finished 21/29 with 201 passing yards and three TD’s and became Super Bowl MVP for the fifth time.

Kansas City got on the board first with a field goal but it was all Tampa Bay after that. Toward the end of the first quarter, Brady tossed a screen to Gronkowski for the opening touchdown. Amazingly, that was Brady’s first first quarter touchdown in his 10th Super Bowl appearance.

The Chiefs had an opportunity to get some momentum on their side but it was squandered. First, Joe Haeg dropped a touchdown that would’ve put the Bucs up 14-3. And then the Chiefs got a goal-line stop to end the drive. But after a Tommy Townsend shanked punt, Antonio Hamilton went offside on the field goal to extend the drive and Brady got to Gronk again to get to 14-3.

After a Chiefs field goal, the Bucs had a minute to get another score and that was plenty of time for Brady. With six seconds to spare, Brady completed the single yard TD to Antonio Brown to go up 21-6 at halftime.

The second half was just like the first in terms of Bucs domination. When the Chiefs were kicking field goals, the Buccaneers were scoring touchdowns and they did that once again in the third quarter. After a 52-yard Harrison Butker field goal, Leonard Fournette ran for the 28-yard touchdown to go up 28-9.

Leonard Fournette showing off some juice! The Bucs are in full control right now. #SuperBowl pic.twitter.com/Bk7n1jTarr

It would be easy to focus on Tampa’s offense but the defense stepped up as well. In particular, Shaq Barrett was all over Patrick Mahomes, hitting him four times and sacking him once. That led to a crucial interception by Antoine Winfield Jr. that really indicated this was over.

Immediately followed by a Patrick Mahomes interception. It's all Bucs right now. pic.twitter.com/XlyADg6XNV

Some will point to the officials and their involvement in the Super Bowl. Yes, the refs made questionable calls and they all seemed to go against Tampa Bay. But let’s face it, Kansas City was outmatched every step of the way. Surely, they were prepared but the Bucs made them look rather pedestrian. Mahomes was giving it his all and his scrambling around proved that but his linemen looked like (but probably didn’t) gave up in the second half and let Mahomes take some hellacious hits toward the end. The refs may not have done the Chiefs any favors, but the Chiefs didn’t deserve to win the Super Bowl with that performance.

So now that Super Bowl LV is in the books, what does that say about the people on both teams? The Chiefs should have nothing to worry about. The still have a great team and remain in line to be the next dynasty. Patrick Mahomes is 25 and will be in many more Super Bowl’s. Will he match Brady’s seven? That might be difficult, but he’s going to have more than one.

For the Bucs, they might be more focused on the short-term but they’re striking while the iron’s hot and have a pretty good shot at winning a third Super Bowl next year. Brady is already the GOAT but winning an eighth Super Bowl will further cement his legacy and people should bet against them at their own peril.