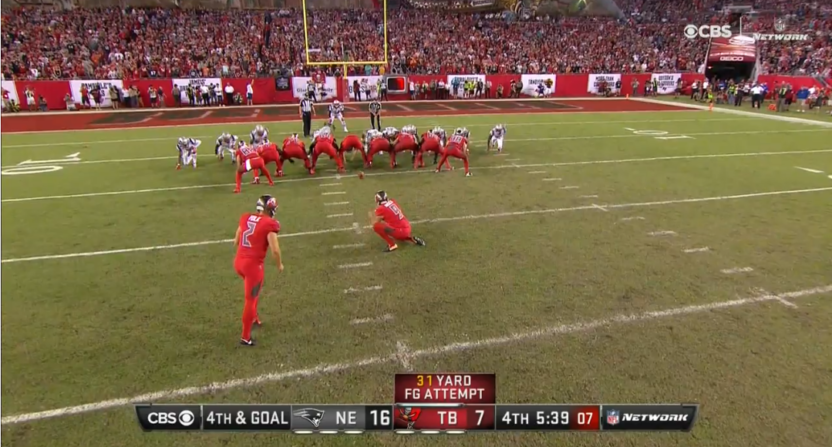 The Tampa Bay Buccaneers inexplicably traded up to use a second-round pick (59th overall) on Florida State kicker Roberto Aguayo in the 2016 NFL Draft. Even if the kicker were to become an All-Pro, that doesn’t necessarily mean trading up to select the kicker in the second round was a good use of resources. Good-to-great kickers can be found cheaply in free agency (even off the street frequently during camp or in-season), late in the draft, or with undrafted free agents.

Then again, in the case of the Bucs, they may even be able to willing to give up a first-round pick these days if it came with a guarantee that they would get good kicking production. That’s how big of a mess their kicking game has been the last two years, and it’s been the difference in several games.

Like, on Thursday night, when Nick Folk went 0-for-3 in the Bucs’ 19-14 loss to the New England Patriots. It doesn’t take a math wiz to figure out that if Folk makes even 2-of-3 on field goals, that’s the difference between a Bucs loss and win.

Sure, a 56-yarder that was apparently into a breeze is a low-percentage attempt and you can understand a miss (though, this is still a pretty horrible kick):

Folk’s second attempt came when the Bucs were down nine in the fourth quarter. For some reason, they opted for Folk trying a 49-yard field instead of just going for it on 4th-and-1. Folk again missed terribly, but this one is every bit as much on Bucs head coach Dirk Koetter. As Tony Romo said, “You have to go for it there.”

And the third miss… yikes. Romo’s reaction here is great, and accurate:

“Oh my goodness. It just continues around here. It can’t continue like this for Tampa Bay! Two years in a row! Over and over again!”

Folk beat out Aguayo for the Bucs’ kicking job in training camp after Aguayo went 22-of-31 on field goals and 32-of-34 on extra points last year. As shown on HBO’s Hard Knocks, Aguayo looked as bad in camp and preseason games, while Folk looked decent and beat out Aguayo for the job. But primetime regular-season football is a different animal than camp and preseason. Folk has looked brutal under the lights with six field goals made in 11 attempts, and seven extra points made in nine attempts.

So, what do the Bucs do now?

Well, releasing Folk seems like the first step. Even if the Bucs think Folk is better than this, it’s hard to let him continue as the team’s kicker. While Bucs players will surely defend their teammate to the media, everyone in that locker room knows that their kicker is largely responsible for the loss to the Patriots (though Jameis Winston not playing well certainly didn’t help things). They know Folk has been awful this year. They know that they should be 3-1 and tied for first place in the NFC South instead of being 2-2. Overreaction or not, general manager Jason Licht should release Folk and make it clear to the team that Folk’s’ performance isn’t good enough.

The problem of course is identifying a better option. And clearly this organization has trouble spotting good kickers!

But there do appear to be some potential upgrades out there (and almost surely upgrades from Folk’s current production, at least), with veterans Josh Lambo, Mike Nugent, and Dan Carpenter among the kickers available in free agency. The Chiefs recently cut a very good kicker in Cairo Santos, but he’s currently on injured reserve and it’s unknown when he’d be healthy enough to play.

Although it’s hard to see the Bucs wanting to go down this road again, they could bring back Roberto Aguayo, who’s a free agent after being cut by the Bears in early September. Aguayo — and Lambo — actually just worked out for the Bears this week; the Bears are looking for an upgrade over Connor Barth (2-for-4 on FG). And Barth was the last decent Bucs kicker (he was with Tampa Bay from 2009-2012, as well as 2015), so the Bucs may be interested in a reunion if he’s cut by the Bears.

Having the Thursday night game gives the Bucs the benefit of having extra time to scout kickers and try to improve what has been a miserable situation for their team the last two years. Look for Tampa Bay to have a new kicker for their Week 6 game at Arizona.