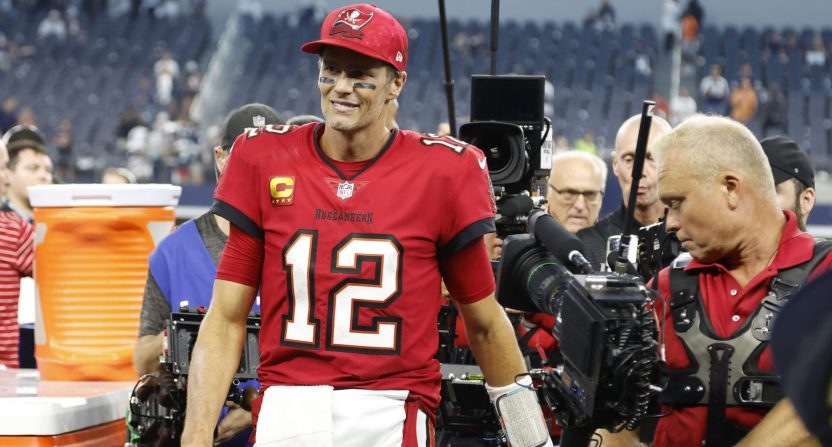 It was a wild offseason for legendary quarterback Tom Brady, who retired and then un-retired while seemingly dealing with a mix of personal matters with his wife Giselle Bündchen because of that decision.

Luckily for the Buccaneers, Brady was able to put all of the personal issues aside for their first game of the year, convincingly beating the Dallas Cowboys on Sunday.

Brady didn’t need to have the most impressive game to do so, but he was steady as usual and that was enough to get past a lifeless Cowboys offense in their first matchup.

He discussed the game during Monday’s installment of his “Let’s Go!” podcast, where he detailed that he certainly feels the effects of the game more at 45 years old than he did in past seasons.

“There’s no margin for error when you’re 45,” said Brady on his podcast via Sports Illustrated. “You know, you take hits and you feel every hit. When you’re younger, your body’s a lot different.

Brady then went on to say that some of these hits have him questioning his commitment to football, which should certainly be worrying for Buccaneers fans hoping for a long season with Brady at the helm.

“And you look at your arm and you got bruises, you got cuts,” Brady continued. “And you go, ‘OK, how much longer do I want to make this commitment?’ And I obviously made the commitment for this year and everything’s going to be like always — continue to evaluate all these different aspects of playing.”

It’s never a great sign when a player starts questioning their commitment to the game, especially one game into the season.

The toll of an NFL season is extremely rigorous for any player to deal with, much less a 45-year-old quarterback who is dealing with some personal issues on top of everything, so it will certainly be worth monitoring how Brady’s body holds up as we get deeper into the year.