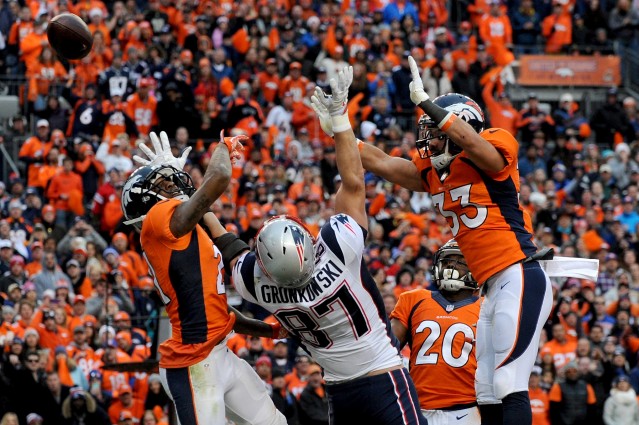 In the more specific and meaningful sense of the word, the old man did very little to win a conference title for the Denver Broncos.

The people who write the stories of professional sports — in this case, the NFL — are concerned with those kinds of details. Peyton? He doesn’t care one bit. In fact, there’s very likely a part of him — deep inside — which is saying, “About damn time I won a game like this.”

He did… and now Manning gets one last parade in the ultimate American sports spotlight, one last chance to tie his brother with two Super Bowls, one last run at an NFL title.

In the 2003 and 2004 NFL seasons, Peyton Manning was coming into his own as an NFL quarterback. He played virtually flawless playoff games in each of those two postseasons… and then came to Foxborough to play the New England Patriots. Those Bill Belichick-Tom Brady teams were hardened by their exclusion from the 2002 playoffs. They had learned, after their first Super Bowl title, exactly what it took to reach the pinnacle and stay there.

Manning played as perfectly as a quarterback could play in the 2003 Divisional Playoff round, when he guided the Indianapolis Colts past the Kansas City Chiefs, 38-31. It was vintage Manning, dominating everything about the game from his command center in the pocket. Over the next decade, Manning continued to create magic as the orchestrator of the Colts’ offense, making a first-round bye a regularity and always putting his team within reach of greatness.

However, when the biggest games arrived in late January, the Patriots had a complete team which could not just neutralize Manning, but overwhelm him. The Colts might have had the best field general they could have hoped for, but the Patriots had the army of Tedy Bruschis and Mike Vrabels and Rodney Harrisons. Those players complemented Brady and enabled Touchdown Tom to not have to do everything himself. (Brady did everything himself in Super Bowl XXXVIII against the Carolina Panthers, but that’s part of the greatness of the Patriots — they didn’t always have to lean on one source of production).

Those 2003 and 2004 defeats for Manning at the hands of the Patriots began to cement the historical record that Brady was and is — and always will be — the better postseason quarterback, the more heralded champion in the fuller run of history. It’s pretty much impossible to contest that claim, but there was always a grain of truth in the notion that if only Manning had more of a supporting cast, a different story would have been written in the pages of time.

If only Mike Vanderjagt hadn’t gacked that field goal for the Colts against the Steelers in the 2005 playoffs. (“Missed it,” we all remember Peyton saying from the sidelines in the RCA Dome that afternoon.)

If only his defense had been able to stop Billy Volek and the San Diego Chargers in the 2007 postseason — it couldn’t, at home, with a bye.

Years later, in January of 2013, Peyton — then in Denver but still on top of his game — had to wonder why Bronco safety Rahim Moore couldn’t play basic defense in the final 45 seconds of regulation, allowing a 70-yard touchdown to Jacoby Jones of the Baltimore Ravens to send the game into overtime. Manning led a tiebreaking touchdown drive in the fourth quarter against Baltimore, but when he threw an interception which led to the Ravens’ game-winning field goal in overtime, that moment was forgotten.

Peyton has often stood on the wrong side of AFC playoff games in which he was the better quarterback, but the other team had more good players, especially on defense.

That changed on Sunday. This time, Peyton wasn’t the better quarterback, but he had the better army at his back.

This time, Peyton had players such as Derek Wolfe and Von Miller on his team. They and a cast of several others destroyed New England’s offensive line, a central weakness of the Patriots in the latter portion of the season. Tom Brady played a marvelous fourth quarter, but he was rattled for much of the first three quarters by the consistent push of the Broncos’ front seven and the Pats’ total inability to turn to a credible running attack. These two realities enabled Denver to carry an eight-point lead into the game’s dying moments, thereby reducing New England’s margin for error.

Peyton and the Broncos had Darian Stewart, who was exceptionally strong in this game at safety before getting injured. The army in orange also included Chris Harris, Jr., who played through a shoulder injury to cover receivers and shut off the home-run pass play. The army which had Peyton’s back on Sunday very much included the former Patriot, Aqib Talib, who broke up Brady’s tying 2-point conversion pass attempt with 12 seconds left.

Also on Peyton’s side this day, when the better army beat the better quarterback and the awe-inspiring performance of a hobbled Rob Gronkowski, was a placekicker-punter combination.

Yes, unlike Vanderjagt exactly 10 years earlier, Peyton got everything he could have wanted from his kickers. Brandon McManus’s 52-yard field goal just before halftime was one small but important moment in the larger architecture of Denver’s win. If he doesn’t make that kick, New England might not have been down by eight in the final six minutes. The Patriots might not have needed to go for the touchdown in all three late-game instances when they drove deep into Denver territory.

Down by five, they almost certainly would have kicked a field goal near the six-minute mark. Instead, they felt they needed to go for a first down, a perfectly responsible and legitimate decision by Belichick. (The play selection used by the Pats? That’s another story. Neither offensive play caller did anything in this game worth praising. Gary Kubiak was worse than New England’s Josh McDaniels, but it’s not as though New England found solutions to the Broncos’ defense.)

Punter Britton Colquitt hit a mediocre punt in the early going, returned for more than 20 yards. After that wake-up call, he consistently pinned New England deep, forcing the Patriots’ marginal offensive line to do a lot of work in order to score touchdowns against the Broncos’ defense. New England scored only two touchdowns all day, none on a drive which required more than half the field.

Brady — a fierce pass rush in his face all game long — did throw the interceptions Manning managed to avoid. In that sense, Brady’s performance was deficient, while Manning made an important contribution to his team, one which he failed to provide in the first half of this long NFL season.

However, for all his flaws in this game, Brady still made his presence felt in crunch time. His barrage of dimes — thrown into tight windows during repeated fourth-quarter drives — reminded us how great a champion New England’s most iconic player really is. Gronkowski, dragging his body through the game and having missed large stacks of plays due to his diminished physical condition, willed himself to catch a lofted long ball on a late fourth-and-10 play to keep the Patriots alive. Those two men, in many ways, were the most impressive players on the field, a reality affirmed when Brady hit Gronk for an improbable fourth-down touchdown just moments later, setting up a crescendo straight from a Hollywood script.

Talib, however, stopped that 2-point pass, and when Denver recovered the onside kick, it was all over.

Peyton Manning — often outfoxed by an opposing defensive coordinator in Januaries past — had Wade Phillips on his side this time. He had the better placeckicker, while New England’s Stephen Gostkowski turned into Stephen “Cost-kowski.” The normally unflappable kicker’s missed PAT profoundly affected the fourth quarter.

Manning even had help from unlikely sources — not so much on Sunday, but in the workings of the whole season. Brock Osweiler’s win over New England on Thanksgiving weekend helped Denver get home-field for this game, something it desperately needed. The Miami Dolphins’ win over the Patriots in week 17 also gave Denver a home date on Sunday. Without those contributions, Peyton doesn’t turn 50… Super Bowl 50, that is.

This time, Peyton Manning — no longer the lonely figure trying to carry a team on his back in the NFL playoffs — got by with a little help from his friends.