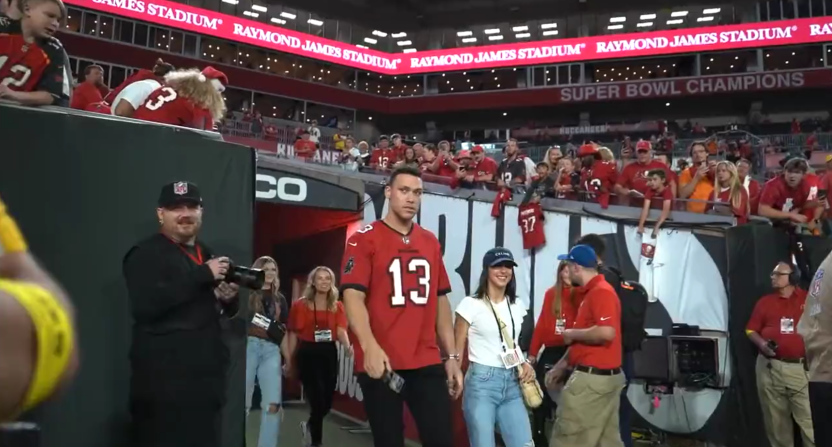 Judge took the time to talk to Buccaneers quarterback Tom Brady, chatting it up with the legendary quarterback in the tunnel as Brady was walking out.

American League MVP @thejudge44 in the house and repping @MikeEvans13 🙌

There has been a ton of speculation as to where Judge will sign this offseason.

While the New York Yankees are obviously contenders to bring him back, there have been reports that suggest the San Francisco Giants are also real contenders to sign the veteran slugger.

This video of Judge’s appearance at the game has only led to even more speculation about Judge’s final decision, which could be coming within a matter of days.

Everyone seeing Aaron Judge in Tampa at the Bucs game while the MLB Winter Meetings are happening pic.twitter.com/KthyIEivXd

Aaron Judge is hanging out at the Bucs game ahead of his arrival at the Winter Meetings tomorrow⚾️👀
(via. @JennaLaineESPN) pic.twitter.com/uANMEedxLJ

The hottest free agent on the market…Aaron Judge in the building for some MNF pic.twitter.com/LheXtTmAz3

While the Tampa Bay Rays are likely not a real contender to sign Judge, some jokingly added that this could mean that he has an interest in joining the Rays this offseason.

DOES THIS MEAN THE RAYS ARE A MYSTERY TEAM? lol

This is likely just Judge wanting to support Tom Brady and Mike Evans, but this could actually be a positive sign for the Yankees.

The Yankees Spring Training facility is notably right next door to the Buccaneers’ stadium, meaning that it is possible that Judge spent time at the facility earlier on Monday.

Aaron Judge is in Tampa for Monday Night Football, right next door to the Yankees Spring Training facility

Regardless, it is certainly weird timing to be going to an NFL game considering MLB’s Winter Meetings are going on across the country, in San Diego.

Yankees general manager Brian Cashman said on Monday that he “has not been informed” about Judge potentially arriving in San Diego this week.

Yankees GM Brian Cashman says “we’re still talking” with Aaron Judge’s reps and has made multiple offers over this free agent period. Has not been informed about Judge arriving in San Diego this week as reported by @BryanHoch “It’s his dance,” Cash said of Judge.

For the time being it seems like Aaron Judge is focused on enjoying some football on Monday night amidst all the speculation.