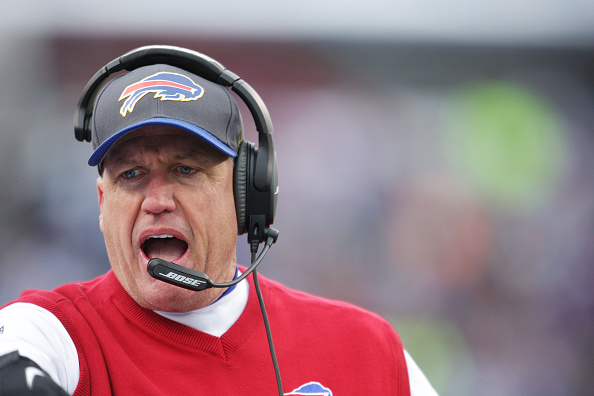 Much like the man he supports in the race for President, Buffalo Bills head coach Rex Ryan is a proponent of media censorship.

The Buffalo Bills released their media guidelines for training camp on Tuesday, and some of the rules will raise a few eyebrows.

There are the standard “do not speculate on injuries in closed practices”, “do not reveal substitution patterns”, and “do not report on trick plays or special packages”, but the policy quickly takes a swift turn into ridiculousness from there.

Bills begin OTAs today. Reporters are not allowed to tell you who dropped a pass or who threw an interception. pic.twitter.com/TCGVgUtUI0

The Bills effectively banned negative coverage of their players in training camp. Reporters are not allowed to mention basic stats like completion percentage, dropped passes, and interceptions in their training camp coverage.

Media cannot report who is on the 1st team, 2nd team, who is "rushing the passer, dropped passes, INT's, QB completion percentage, etc."

As one would expect, the Buffalo media is not happy about these measures. Here is just a sample of some of the outcry.

Said it before and I'll say it again. Always amused by what teams say you can report that you see with your own 2 eyes. No dropped passes?

"The Buffalo Bills Media Relations department reserves the right to amend this policy at any time." How about you 'amend' some common sense?

NFL teams think they are the CIA. It's amusing. They also think they own the reporters. https://t.co/MCcv8boxtb

The NFL itself is no stranger to trying to bend the facts to its will, so it should not come as a surprise one of its teams is attempting to do the same here. Not only do policies like this go against the tenants of free speech, they also do a disservice to fans wanting to stay up to date on their favorite team. Hopefully this backlash will cause the Bills to rethink their arcane censorship rules and allow the media to actually do its job.