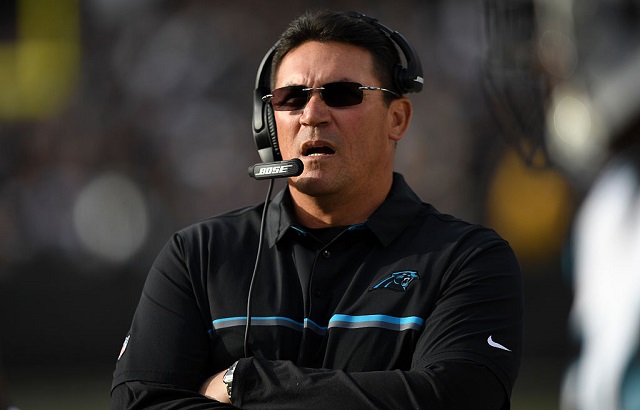 Carolina Panthers coach Ron Rivera caused quite a stir early in Sunday night’s matchup with the Seattle Seahawks. As a disciplinary measure, Rivera held quarterback Cam Newton out for the first play of the game, which turned out to be a disastrous decision. While the Panthers called a seemingly safe rollout pass to fullback Mike Tolbert, the throw tipped off Tolbert’s hands and was intercepted by Seahawks linebacker Mike Morgan.

However, as damaging as that opening play was for the Panthers, it was just one play. The decision to keep Newton on the sideline when the Carolina offense first took the field continued to have life well after the fact because no one knew why Rivera had chosen to penalize his quarterback. Several reporters passed along the news that Newton had been benched for “disciplinary reasons,” which was a rather vague explanation.

Did Newton get into a fight with a coach or teammate? Had something occurred during pregame warmups? Did Rivera and the Panthers’ coaching staff become aware of some sort of off-the-field issue that needed addressing? Create a vacuum and misinformation will rush to fill it. Give people the opportunity to speculate and they will gladly do so, especially on Twitter.

As we now know, Newton was held out for that first play Sunday night because of a dress code violation. The quarterback had failed to wear a tie while the team was traveling, breaking one of Rivera’s rules. We can debate how silly that is, but the bigger issue is that Rivera and the Panthers had an opportunity to get the correct information to the public right away and neutralize any rumor and speculation from occurring. NBC has a sideline reporter right there on the scene as part of its Sunday Night Football broadcast. Shouldn’t Rivera or a team official have said something to reporter Michelle Tafoya before the game began and make the record clear?

“Tell her what the deal is,” Schrager said, “so that people aren’t speculating on Twitter that he’s got issues with the law, curfew, anything like that. Tell the sideline reporter; it’s a boardroom thing. We had a production meeting yesterday; you couldn’t tell me? I’m on the field an hour before the game. Give me a heads-up, give me a tip.”

Schrager is exactly right here. Rivera or the Panthers not saying anything compelled Tafoya to make the somewhat embarrassing admission that she didn’t know what the story was with Newton, which is an awkward position for a sideline reporter to be in. But to be fair, she can only go with the information she’s able to find, the news that she’s given. If no one on the Panthers’ side is even hinting that Newton is going to be benched for the game’s first play, let alone explain why the discipline is occurring, Tafoya isn’t being allowed to do her job properly. Fans love to rip on sideline reporters as generally useless, but what about when relatively simple information isn’t being shared with them?

What’s even more baffling about this, however, is that football coaches and professional teams are often so concerned about controlling the message. The Panthers may have believed they were doing so by not revealing why Newton had been benched and letting it be revealed in the game itself. But that decision actually resulted in the opposite effect. The message was anything but controlled because it was put in the hands of the speculative public. By the way, that included broadcasters Al Michaels and Cris Collinsworth, who were forced to address the matter because it was right there on the screen without any information to provide viewers.

It seems like such a simple thing. This is why teams have media relations departments, and why coaches and players receive media training. Yet coaches always seem to feel that they can control everything related to their football team. In more ways than one, that decision backfired spectacularly for Ron Rivera.