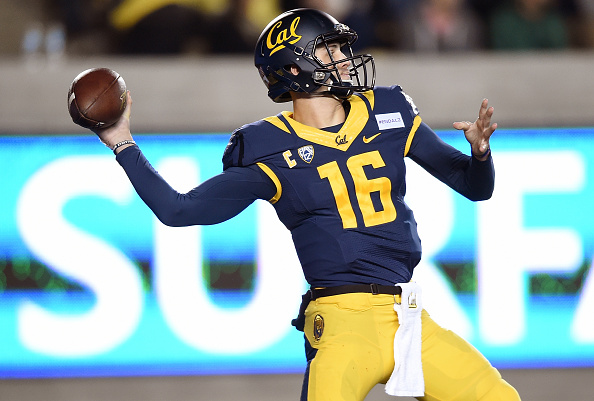 ESPN’s Joe Schad reports that California Golden Bears junior quarterback Jared Goff will announce on Thursday that he is declaring for the 2016 NFL Draft:

The school sent out a release earlier Wednesday that Goff will discuss his future plans at a 10 a.m. PT news conference on Thursday.

This news certainly comes as no surprise, as Goff is considered by most evaluators to be one of the top two quarterback prospects — Memphis QB Paxton Lynch being the other — for the 2016 draft class. And Goff’s list of believers grew after he put on an absolute show Tuesday in the Armed Forces Bowl, throwing for 467 yards and six touchdowns in Cal’s 55-36 win over Air Force.

Obviously a lot can change between now and the draft, but Goff should currently be viewed as a likely top-15 pick, with the potential to even be the first player selected.

Which leads us to the next topic: where could Goff land?

Teams that immediately jump out as quarterback-needy on that list are the Browns, 49ers, and Eagles. The Titans of course have Marcus Mariota, so they’re either taking a non-quarterback or trading the pick.

If the Titans keep their pick, the Browns would have the first shot at a quarterback, and Cleveland of course needs one desperately. The Johnny Manziel situation is a mess, and Josh McCown is purely a stopgap option.

If not the Browns, then we have the 49ers at the No. 5 spot, and they have been linked to Goff for months, especially with the local connection. They seem done with Colin Kaepernick, and it’s doubtful they see Blaine Gabbert as a long term option either (or at least are unlikely to let him get in the way of a top draft prospect).

And then the Eagles… who knows what’s going on there now with Chip Kelly out. But we know Sam Bradford certainly hasn’t looked good.

Keep in mind that teams like the Cowboys, Chargers, Giants, and Saints could be interested in a young quarterback like Goff, thinking long term. Tony Romo turns 36 in April, Philip Rivers turns 35 next December, Eli Manning turns 35 in January, and Drew Brees turns 37 in January.

The Cowboys reportedly had scouts at the Armed Forces Bowl to watch Goff, and given Romo’s age and health concerns, it certainly makes sense.

So, if Goff’s stock at least stays where it is right now, he should have plenty of suitors for his services early in the draft. And if his stock rises, it would be hard to see him not being a top-5 pick.