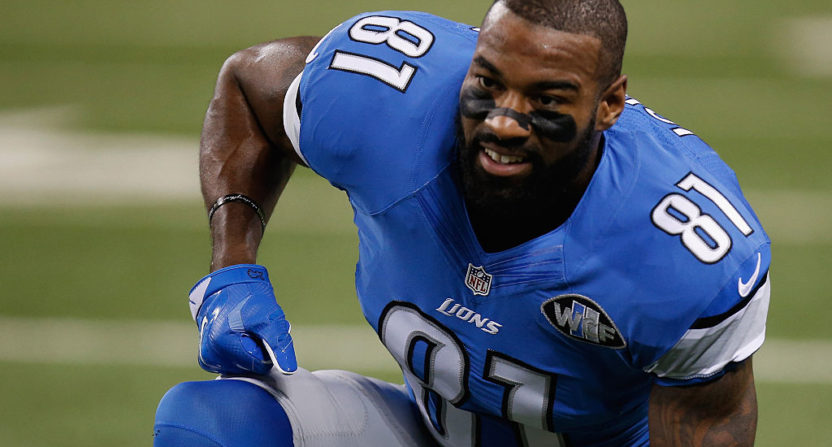 Former Lions star Calvin Johnson made a brief return to football this week, delivering the game ball at the Italian Bowl. While reiterating to Italian media that he plans to stay retired, Johnson also slammed the Lions, saying a big part of his decision to retire young at 30 years old, which caught even his own teammates by surprise, was that he didn’t feel the franchise could compete for a Super Bowl.

Think about how the Seahawks handled Marshawn Lynch’s return from retirement this offseason. They knew he would only come back for Oakland, so they gave him up for a pick swap. Now Lynch is happy, and at least Seattle got something out of it. Apparently the Lions had no interest in making any sort of deal when Johnson wanted to leave the team.

The media at the Italian Bowl continued asking about Johnson’s relationship with the Lions, and he eventually dropped the hammer:

“I didn’t see a chance for them to win a Super Bowl at the time, and for the work I was putting in, it wasn’t worth my time to keep on beating my head against the wall and not going anywhere.”

Last year, Johnson told ESPN’s Michael Rothstein that losing was not the reason he retired. Still, although he didn’t mention the team’s struggles explicitly, he gave the following quote that implied losing was a factor:

“I wouldn’t just quit because we were losing,” Johnson said. “Just [my] body, man, I was tired of it. I was fed up. Had enough.”

In Johnson’s nine seasons with the Lions, they made two playoff appearances but lost in the Wild Card round each time, one of those losses an infamous heartbreaker against the Cowboys in 2014. Johnson’s freak catches and record-setting accomplishments were often the highlights of their seasons.

According to Rothstein article, Johnson knew the 2015 season was going to be his last. Going 7-9 that year clearly didn’t make him second-guess his choice. And things have worked out okay for Megatron post-retirement as he earned a spot on Dancing With The Stars and then snagged a role in a Transformers ad.

With everything we know about the long-term effects of football injuries, it’s understandable that Johnson would want out unless he could receive the ultimate reward: a championship ring. And while Lions fans may be ticked off that Johnson is saying inflammatory things about his time in Detroit, it’s not like the franchise’s ineptitude is a secret.