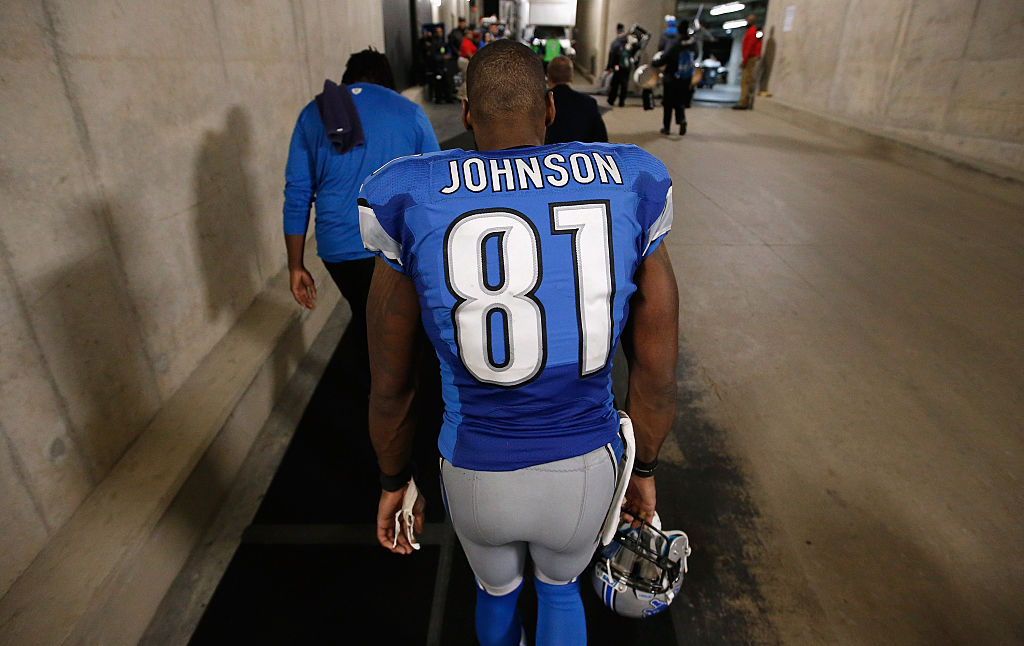 Calvin Johnson was really good at football, both in college at Georgia Tech and in the NFL with the Detroit Lions.

And then out of nowhere in March of 2016 at the age of 30, Johnson suddenly retired from the NFL. On Tuesday, Johnson was asked by ESPN about the possibility of a comeback and he immediately said no.

“I’m not coming back, man,” Johnson told ESPN. “Look, man. I got stuff that’s going to hurt for the rest of my life. I got a finger that’s literally bone-on-bone. This bad boy, it gets smaller. The more and more I do, it grinds bone-on-bone.

“Literally from last year, I went this year to get another X-Ray and this is after I retired, I knew it was messed up but I didn’t know to what degree because it was hurt.”

The finger issue is one of many injuries that caused the incredible wideout to retire. Johnson told ESPN his doctor said he had two options to deal with his finger: wait a year to see how it heals or have surgery. Johnson decided to wait for it to heal. Since he’s not playing football anymore, the chances of it getting worse are smaller. He also has issues with other fingers too.

By not playing anymore, Johnson is also avoiding re-injuring an ankle injury that prevented him from standing on his tip-toes last season. The now 31-year-old has a pinched nerve in his shoulder and damage to his knees.

Those hurting daily while getting pummeled by defensive backs are one of the many things Johnson doesn’t miss.

“The thing I don’t miss is waking up in the morning, hurting, the grind of the game. I got chronic stuff that everybody has when they’re done playing football for any length of time,” Johnson. “So the good thing is I’m able to walk. I feel good. I’m able to spend more time with the fam. I’m able to chill. I don’t have to go out and run three miles every day in practice, you know what I’m saying. Goodness gracious.”

But he does miss some things.

“The only thing I miss, but I still get it because I get to hang out with the guys, is the camaraderie,” Johnson said. “The guys that I really hung out with, Dom [Raiola], Rob [Sims], Matthew [Stafford], the guys I played with for most of my career, five, six years each, I still hang out with those guys, so it’s not that bad.”

During his spare time Johnson occasionally watches the Lions, although he didn’t have a ton of time at the beginning of the season since he was on Dancing With the Stars.

“Oh man, to watch football now, I’ve been looking forward to sitting back and watching football ever since I stepped into the league. You lose that,” Johnson said. “When I was in college, I used to love to watch football on Sundays. And for nine (years), almost a decade I was away from that.”

Johnson was drafted with the second overall pick in the 2007 draft out of Georgia Tech, so he’s been waiting a while to simply watch football on Sundays.

“To be able to sit back and enjoy the game, sit back and watch guys that you know played and you might have worked with it or you personally know, it’s cool, it’s awesome to sit back and say I know that guy because you’re more of a fan of that game and that person. But I’ve only been able to watch the last three or four games,” Johnson added.

Johnson told ESPN while he didn’t miss out on much during his career, his only regret was he never won the Super Bowl. The wide receiver made it to the playoffs twice and lost in the wild-card round both times.

Despite never winning a ring, he did set multiple Lions’ receiving records. Overall, Johnson finished with 731 catches for 11,619 yards and 83 touchdowns. That’s a pretty good career stat line and definitely cemented him as one of the best wide receivers of all time.