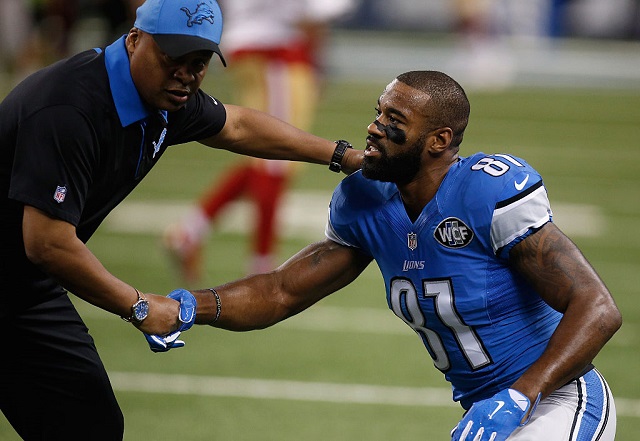 A year after taking the Detroit Lions to the playoffs as an NFC Wild Card team, the future remains in doubt for head coach Jim Caldwell. With a change at general manager underway in Detroit, it remains to be seen what the future holds for Caldwell after just two seasons. One thing is for sure, though. Star wide receiver Calvin Johnson wants to play for nobody else in 2016 but Caldwell.

“Yeah, man, I love him,” Johnson said in a report from The Detroit News. “I think everybody in the locker room would probably say the same thing. He commands respect, but he doesn’t have to do much.

“It’s just his character, guys gravitate towards him. He’s easily one of my favorite coaches I’ve had.”

Since going 1-7 before their bye week (resulting in the firing of GM Martin Mayhew), the Lions have made an impressive turnaround, winning five of their past seven games. But Detroit will miss the playoffs because of that abysmal start. Caldwell did steer the ship back on course (dismissing Joe Lombardi as offensive coordinator and promoting Jim Bob Cooter was an overdue decision that worked out wonderfully), but will it be enough to save his job for next season?

Johnson’s comments of support for Caldwell are encouraging to hear if you are Caldwell, one might think. What is also left unknown for now is whether the receiver will even be around in 2016 for the Lions. Johnson is scheduled to cost Detroit $24 million in 2016 if he remains on the roster. At that price, even if Caldwell does return under the new still-to-be-named general manager, Johnson may still be suiting up for another NFL franchise in his 10th professional season.