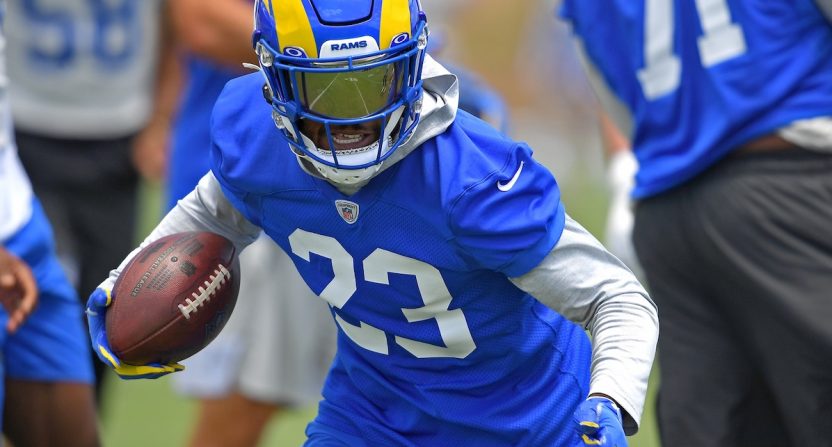 After trading for quarterback Matthew Stafford in late January, many NFL fans and media viewed the Los Angeles Rams as a serious Super Bowl contender. Will those expectations change following a season-ending injury to running back Cam Akers?

Brutal blow for L.A., which loses its leading rusher from last season a week before camp begins.

Akers, who just turned 22, suffered a torn Achilles tendon while training and will miss the entire 2021 season. The injury occurs a week before the Rams were scheduled to report for training camp.

The second-round pick from Florida State was coming off a strong rookie season during which he rushed for 625 yards and two touchdowns in 145 carries. He also caught 11 passes for 145 yards and another score.

Akers was expected to emerge as the featured back after working in a three-back rotation with Darrell Henderson and Malcolm Brown. He was headed in that direction in the final seven games of last season (including the playoffs), averaging 113 yards from scrimmage. In Week 14 versus the Patriots, Akers rushed for 171 yards on 29 carries.

Cam Akers had his first 100+ yard rushing day last season against The Patriots. Finishing the night with 194 total yards. Akers looks to take a more consistent role as lead back this coming season. I suspect many more 100 yard efforts are in store for us! pic.twitter.com/5maXiUga6F

More space was likely to open up for Akers in the Rams’ offense with Stafford arriving as a more explosive downfield passing threat. Last season with the Lions, he threw for 4,094 yards and 26 touchdowns despite a torn ligament in his right thumb and another in his left elbow. Stafford also dealt with torn cartilage in his ribs and sprains in his left knee and right ankle. Receivers Robert Woods, Cooper Kupp, and DeSean Jackson could put up big numbers with Stafford.

So there is certainly some production to replace at running back. Of the other backs on the Rams’ roster, neither Xavier Jones nor Raymond Calais had a carry last season (both saw time on special teams) and Jake Funk is a seventh-round pick out of Maryland.

General manager Les Snead will almost certainly be checking the trade market and waiver wire for backs to bring in for training camp. Yet ESPN’s Adam Schefter reports that the Rams’ plan is to see what they have in-house first.

Rams don't have any immediate plans to pursue a free-agent running back. They believe in Darrell Henderson, like last year's undrafted free agent RB Xavier Jones and also drafted RB Jake Funk in the seventh round this year. For now, they're standing pat, but could revisit later. https://t.co/kkIVXrySFq

Trade possibilities include New England’s Sony Michel, Royce Freeman from the Broncos, and perhaps even Jacksonville’s James Robinson (if rookie Travis Etienne emerges as a featured runner). Todd Gurley headlines the free-agent running backs available, but is a reunion with the Rams likely? Le’Veon Bell, LeSean McCoy, Adrian Peterson, Devonta Freeman, T.J. Yeldon, Chris Thompson, and Duke Johnson are other names the Rams could pursue. What about a 16th season for Frank Gore?

Any one of those names could draw some interest from the Rams, though the team could be looking for depth behind Henderson rather than another starting-caliber back.