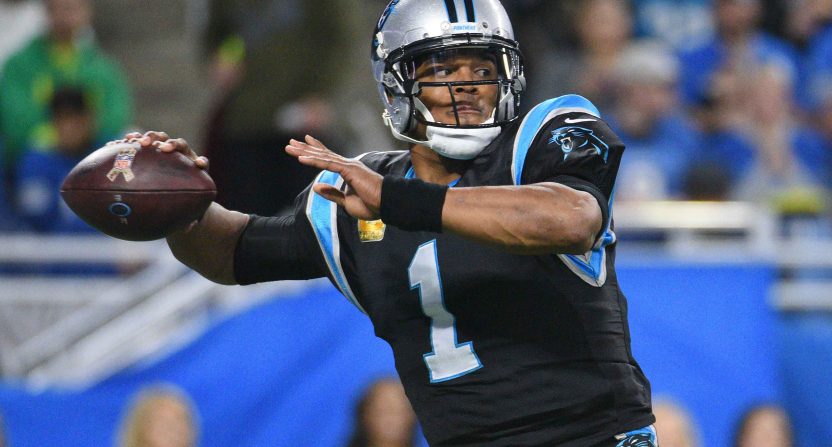 NFL Network’s Ian Rapoport reports that it’s a “bare minimum deal” worth up to $7.5 million.

For the #Patriots and Cam Newton, who have quietly worked on this recently, it’s a 1-year deal worth up to $7.5M, source said. https://t.co/YSHLAcRupb

Newton, 31, joins Jarrett Stidham and Brian Hoyer as quarterbacks on the New England roster, after Tom Brady — who won six championships with the Patriots — left for the Tampa Bay Buccaneers earlier this offseason.

The Auburn product was the No. 1 overall pick by the Carolina Panthers in the 2011 draft, and went on to start 124 games with the Panthers over nine seasons. He won the NFL MVP and led the Panthers to a Super Bowl appearance in the 2015 season. But the rebuilding Panthers released Newton in March, after he played only two games in 2019 due to foot issues and was hampered by shoulder issues over the last couple of seasons.

It’s unknown just how healthy Newton is, and that’s the main reason a quarterback that was an NFL MVP just five years ago has been unsigned deep into June. But perhaps the Patriots have recently been given reason to be confident in his health.

And, even if they haven’t, it makes all of the sense in the world for the Patriots to take a chance on Newton.

While New England is seemingly very high on Stidham, he’s thrown a grand total of four passes in the NFL, and was a fourth-round pick last year. Bill Belichick and the Patriots should of course be given the benefit of the doubt when it comes to evaluating the quarterback position (Brady was a sixth-round pick), but eventually one of these late-round quarterbacks will look like just that- late-round quarterbacks. And Hoyer is the definition of a backup quarterback.

Even if Newton is only 70-75% of the player he was a few years ago, that may be good enough to be the best quarterback on New England’s roster. And that may be good enough to take this team on a deep run. Keep in mind- Brady wasn’t even very good in 2019, putting together a mediocre 88.0 passer rating on the season (he had a single-game passer rating of 89 or better just once in his final eight starts). And still, the Patriots won 12 games, because they had an elite defense and the best head coach in the NFL. They still have those things in 2020.

If nothing else, Newton adds real veteran competition for Stidham, and maybe Newton can teach the second-year quarterback a thing or two. In this particular situation for New England, there’s value in Newton’s presence alone.

There’s very little for the Patriots to lose here, and potentially a lot to gain. It will be a highly intriguing situation to follow.