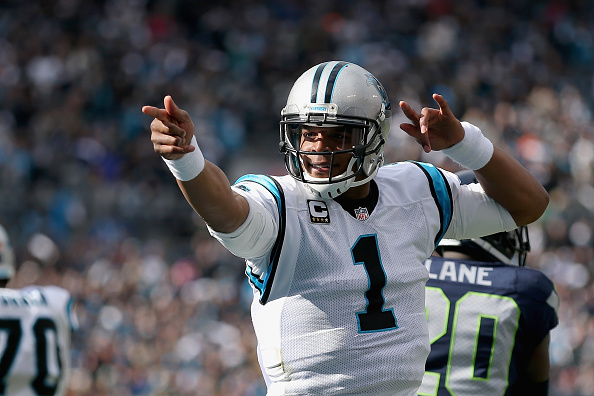 On Wednesday, the Pro Football Writers of America named Carolina Panthers quarterback Cam Newton their 2015 NFL Most Valuable Player. The Associated Press will likely follow suit in early February. But the award was not without controversy.

Indeed, Newton’s name has long been penciled in for MVP honors this season, well before his team went 15-1 in the regular season, becoming the NFC’s top seed in the playoffs. It was clear months ago that Newton was having a special year, one made even more so by the fact so many wrote Newton’s Panthers off at the beginning of the season.

With receivers Kelvin Benjamin and Stephen Hill on injured reserve to begin the year—and Benjamin, especially—it was thought that Carolina’s offense was dead in the water. But no: Newton carried his offense and his team on his back in 2015, and for that he should be rewarded with an MVP nod.

The controversy is not just the hand-wringing, pearl-clutching that editorials around the nation have been espousing all year, thanks to Newton’s flashy on-field performances, off-field wardrobe choices or the fact that his newborn son is named Chosen (because Newton Jr. would be “too much pressure” on the kid), but also the fact that Newton is a non-traditional choice, the position he plays excluded.

Newton is not the league leader in passing yards—that would be the New Orleans Saints’ Drew Brees. He doesn’t have single-digit interceptions thrown like the New England Patriots’ Tom Brady. He’s not a surefire, in-the-clutch Hail Mary thrower like Aaron Rodgers of the Green Bay Packers.

But there was no player more valuable to his team—nor to the league—this year than Newton, and for that he’s the most deserving of the award.

Newton’s completion percentage of 59.7 isn’t the highest of his career, nor are his 3,837 passing yards his most. But the entire body of work—including 35 touchdowns thrown to 10 interceptions, plus another 132 rushes for 636 yards and 10 more scores, and five NFC Offensive Player of the Week honors—blows any and every other player this year out of the water. There would be no 15 wins in Carolina, no Round 1 playoff bye, no top seed, no chance to reach and win the Super Bowl without Newton.

And granted, that could be said about Brady, about Rodgers, about the Arizona Cardinals’ Carson Palmer—but even with those top-tier quarterbacks, only Newton’s Panthers won so many games. The Packers, Patriots, Cardinals would all be dead in the water without their quarterbacks, but the Panthers were expected to be dead even with a healthy Newton. It was Newton, most especially, who gave the Panthers life, direction and motivation. They were his team and they reflected the way Newton approached each game, each week, each down.

And Newton defied the odds in another way—he kept having fun, on the field, before, during and after games. In a world where NFL becomes ever increasingly synonymous with “No Fun League,” Newton continued to bring the fun back to the game, for the fans, for himself and for his teammates.

There was and is joy in the way Newton plays football and it’s infectious. Even the pearl-clutchers are doing so as a response to the fun Newton is having. He does his job well, it affects whole games and it improves the league. There may be no better ambassador for the sport. He’s a teammate and a leader, a joyful supporter of the Panthers and someone who loves what he does for a living. It shows, and again, it deserves recognition.

Like Newton, or hate him. Cheer for the Panthers, or root against them. But Newton’s contributions to his team and to the league this year makes him a no-brainer MVP. There may have been players with better numbers, and certainly other candidates worthy of consideration, but no one is more deserving than Newton to be named the league’s most valuable member this year.