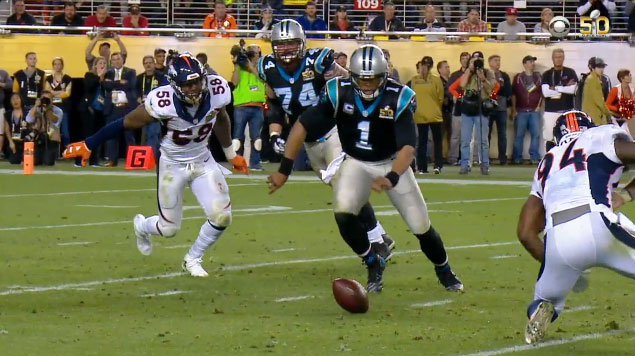 On Tuesday, nearly 48 hours after he fell flat on his face with an abysmal performance in Super Bowl 50, Carolina Panthers quarterback Cam Newton finally properly addressed the media — and by extension, his fans — as he and his teammates cleared out their lockers in Charlotte.

I was looking forward to hearing Newton explain why in the world he shied away from trying to recover a fumble that he appeared to be closest to with the game on the line.

That’s because I was hoping that Newton would offer some sort of extraordinary explanation that I hadn’t accounted for — something that would give me some comfort in the idea that he didn’t make a business decision with the Super Bowl up for grabs.

Instead, he said this:

“I didn’t dive on one fumble because the way my leg was (positioned). It could have been contorted in a way. You say my effort? I didn’t dive down. I fumbled — that’s fine. That’s fine. We didn’t lose the game because of that fumble.”

Newton had two days to think up a great excuse. He could have claimed he anticipated a teammate was going to recover the fumble, as ESPN’s Sarah Spain hilariously suggested, or that he was anticipating it would bounce in a certain direction, as silly as that may be.

Instead, he told the truth. The admission is respectable, and yet, ironically, it has caused me to lose a lot of respect for him.

The reality is nobody knows whether or not the Panthers lost that game because of Newton’s lost fumble. Had they kept the ball there, they likely would have punted on 4th-and-long. But Denver’s offense had gained a total of seven yards on two fourth-quarter three-and-outs, which indicates Carolina was likely going to get the ball back in a one-score game. And it was arguably only a matter of time before that top-scoring offense was going to break through.

Considering that all of that went to hell the moment they turned it over inside their own red zone, there’s actually a very decent chance that fumble cost the Panthers the Super Bowl.

It’s simple. Had Newton risked his precious limbs to recover that ball, Carolina would have increased its chances of winning Super Bowl 50. He didn’t because he feared an injury, but is there an injury in the world that isn’t worth winning a championship?

Newton put himself and his limbs above his team and his desire to win a Super Bowl. There’s no other explanation now. And that’s rather sad. I’ve defended this guy over and over again, and I do feel as though race factors into much of the criticism he receives. But in this case, I can’t defend him.

In this case, he made a selfish, cowardly decision in the biggest moment of his professional football life. I don’t give a damn about the dancing, the celebrating, the dabbing or any of that frivolous minutiae ya’ll have been stressing about. But this? This is different. This is unacceptable, and something his teammates and fans should demand an apology for.