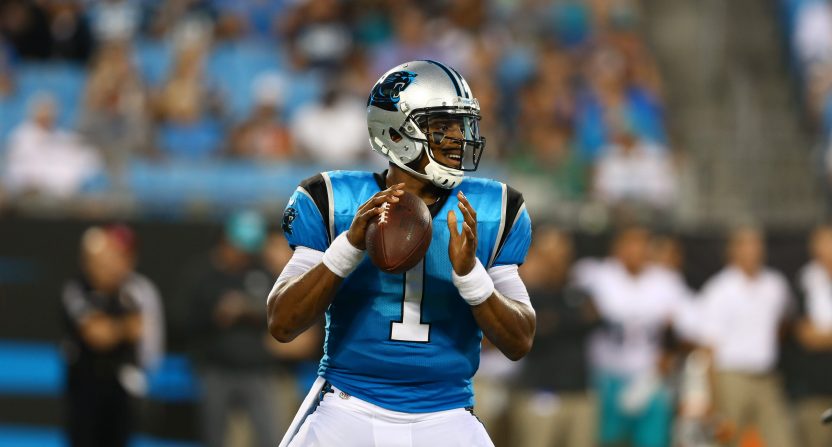 Cam Newton signed a one-year, incentive-laden deal with the New England Patriots on Sunday night. According to ESPN’s Adam Schefter, the Patriots were the only team to offer Newton a contract.

It says a lot about how concerned NFL organizations must be about Newton’s foot and shoulder issues when we’re deep into June and only one team was willing to offer him a cheap contract. This is a guy that was the NFL MVP just five years ago, and there are several teams that have very shaky situations at the most crucial position in sports.

Well, bettors and oddsmakers aren’t just confident in Newton’s chances to beat out Jarrett Stidham for the starting quarterback job; they think he has a very real chance to win his second NFL MVP award.

Shortly after the reports of Newton signing with the Patriots on Sunday night, Newton went from 300/1 odds to 40/1 win NFL MVP at the Las Vegas SuperBook.

Per @SuperBookUSA's Derek Wilkinson (@Derek2Square), Newton moves from 300/1 to 40/1 to win NFL MVP after signing with Patriots. "One wiseguy got me on the mobile app for $100 on MVP 300/1 before I could move it." Would win $30K. @Covers article coming shortly.

That was a stunning increase, but things have gotten even crazier with the odds movement on Monday.

Newton has jumped all the way up to the seventh-best odds on Bovada, at 15/1. Meanwhile, Stidham has 100/1 MVP odds.

From unwanted before yesterday, to 15/1 MVP Odds, and barely behind the 4-6 spots (all 14/1) on the list.  That’s an incredible jump, and perhaps a bit reckless.

Again, there are serious questions about Newton’s health, and nobody can confidently tell you what kind of player he is at this point. He’s missed 16 games over the past two seasons due to the foot and shoulder injuries, and he’s posted a passer rating of 81 or better just once in the past three seasons. Additionally, mobility and ball-carrying have been a huge part of his game and career success; will that continue to anywhere near the same level following his injuries and at the age of 31? We don’t know.

But the fact he’s going to the *Patriots* is a huge part of this, of course.

When the Patriots identify something they like, it usually works out. Bettors are surely buying on Bill Belichick, Josh McDaniels, and the Patriots’ system/magic bringing out the best of whatever Newton has to offer these days.

Additionally, what the Patriots already have going on could allow their quarterback to be in the MVP mix without putting up Mahomes-esque numbers. New England went 12-4 last season, despite Tom Brady having an 88.0 passer rating that ranked 19th in the NFL. Brady was very mediocre on the season, and frankly awful down the stretch (he had a single-game passer rating of 89 or better just once in his final eight regular-season games, and was bad in the playoff loss to the Tennessee Titans). The Patriots were a 12-win, division-winning team primarily because they had the best defense in the NFL by many metrics, and of course because they have Belichick as their head coach.

So, when you consider the Patriots’ defense and coaching, and knowing that the upside is absolutely there with Newton as we saw in his 2015 MVP season, it’s understandable how bettors could be very bullish on the pairing. But giving Newton 15/1 MVP odds is *extremely* generous at this point, with so many unknowns.