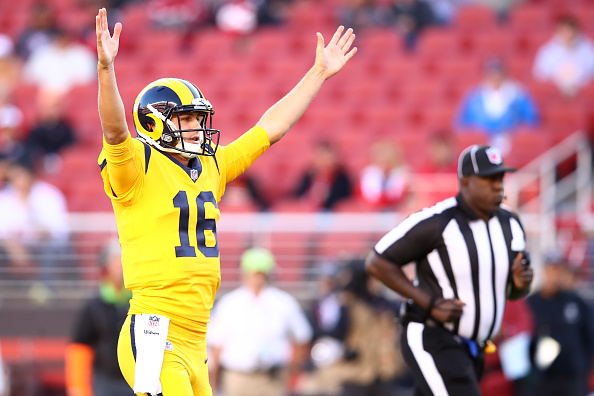 I won’t blame you for continuing to doubt the Los Angeles Rams. This, after all, is a team that averaged an NFL-low 14.0 points per game last season, winning just four games. It’s a team that hasn’t posted a winning record since 2003, and one that is using the same quarterback (Jared Goff) and running back (Todd Gurley) who struggled mightily during that four-win 2016 campaign.

But we’re at the eight-game mark now, and the 6-2 Rams are averaging an NFL-high 32.9 points per game. It’s no longer early, and we may have to become comfortable with the idea that Los Angeles (if we’re even comfortable calling them that at this point) is a good football team.

If so, we’re witnessing one of the most incredible one-year turnarounds in league history.

Is it sustainable? Probably, because it’s not as though the Rams are riding one particularly hot hand. There are a combination of factors at play here. For example:

1. New head coach Sean McVay has the team confident and the offense rolling on all cylinders. He’s getting the most out of players that his predecessor, Jeff Fisher, got almost nothing out of.

2. Goff, who was a complete disaster as a rookie No. 1 overall pick last season, has been a top-10 passer. He ranks tied for first in football with a yards-per-attempt average of 8.3, and only Drew Brees (35) and Tom Brady (34) have completed more 20-yard passes (Goff has 33). And he isn’t fading. Dude was NFC offensive player of the week in Week 9.

3. Gurley, who was lights-out as a rookie but had an abysmal sophomore campaign in 2016, is averaging a league-high 128 scrimmage yards per game.

4. Their top free-agent pickup, veteran offensive tackle Andrew Whitworth, has shored up the line while giving the offense more stability in general. Whitworth looks as though he’ll be in the Pro Bowl for a third consecutive year.

5. They gave the receiving corps a complete makeover, and that unit has come up big. Buffalo Bills castoffs Sammy Watkins and Robert Woods have caught 50 passes for 782 yards, and rookie Cooper Kupp has caught another 26 for 370. Those three have scored a combined eight touchdowns.

Now, does that mean the Rams can actually contend for a championship? On one hand, it’s a wide-open year and nobody is running away with their division, the NFC or the league in general. But on the other hand, there’s still plenty of time for opposing defenses to catch on to what McVay, Goff, Gurley and Co. are doing, and we have no way of telling how such a young and inexperienced team will react to big games in December, or even January,

History isn’t on their side, especially considering how young McVay is. The 31-year-old is the youngest head coach in NFL history. And as I noted in a Bleacher Report piece this summer, the precedents aren’t pretty:

None of those young coaches made the playoffs.

McVay looks as though he’ll buck that trend, but the Rams do feel like a one-and-done playoff team at best. I’ve been wrong before, though, and most of us were wrong about them in September and October. If Goff, Gurley, Whitworth, the revamped receiving corps and an underrated defense featuring defensive player of the year candidate Aaron Donald and led by mastermind Wade Phillips can keep it up, this is a team that could shock the world in 2017.