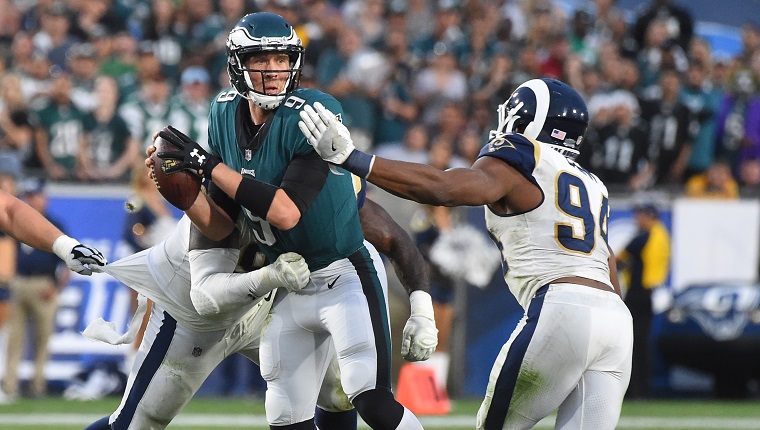 In 1990, the NFC East-leading New York Giants were 11-2 before losing quarterback Phil Simms for the remainder of the season. Jeff Hostetler stepped in and helped them win five consecutive games as a starter, the last of which came against the Buffalo Bills in Super Bowl XXV.

That, naturally, has a lot of folks thinking that the Philadelphia Eagles still have a chance to win Super Bowl LII. After all, the NFC East-leading Eagles were 10-2 before losing quarterback Carson Wentz for the remainder of the season, and replacement Nick Foles is quite accomplished for a backup quarterback.

And yes, the Eagles could still hang on in order to enjoy a home-field advantage throughout the NFC playoffs with Foles under center. And yes, Foles is indeed an accomplished backup. He put together one of the best statistical seasons in league history as a 10-game starter in 2013, and he put up strong numbers in relief of Alex Smith with the Kansas City Chiefs in 2016.

But let’s also remember that in order to win the Super Bowl in this era, you need a superstar under center. Twelve of the last 14 Super Bowls have been won by guys named Manning, Brady, Roethlisberger, Brees or Rodgers, and the other two went to red-hot Russell Wilson and redder-hotter Joe Flacco.

Let’s also remember that 1990 Phil Simms was not 2017 Carson Wentz. Simms was 35 years old when he suffered that injury. And although he was putting together a solid season, he hadn’t been to a Pro Bowl in half a decade. Wentz has been magic this season, and was an MVP candidate based on his clutch passing and running on third down and in the red zone, where he’s been more special than any other signal-caller in the NFL.

That loss will be extremely difficult to overcome, especially in the wild NFC. The Eagles lack big-game experience and are already without stud left tackle Jason Peters, and now they might have to take down teams like the 2009 Super Bowl champion New Orleans Saints, the 2013 Super Bowl champion Seattle Seahawks, the 2015 NFC champion Carolina Panthers and the 2016 NFC champion Atlanta Falcons.

Those teams all have their starting quarterbacks, all of whom should be classified as superstars. Same deal for the 9-4 Los Angeles Rams and the lurking (2010 Super Bowl champion) Green Bay Packers.

Foles is good, not great. If he was great, his career passer rating would be higher than 88.1 and he wouldn’t be playing for his third team in as many years.

Those 1990 Giants had the No. 1 scoring defense in the NFL. These Eagles don’t rank in the top five in that category. Those Giants had Bill Parcells. These Eagles do not. And even if they somehow overcome the loss of an MVP candidate under center in order to beat two of those aforementioned NFC teams at home in January, they’d probably be heavy underdogs if forced to face the New England Patriots or Pittsburgh Steelers in February.

It’s not impossible, but in this day and age it’s a hell of a longshot.