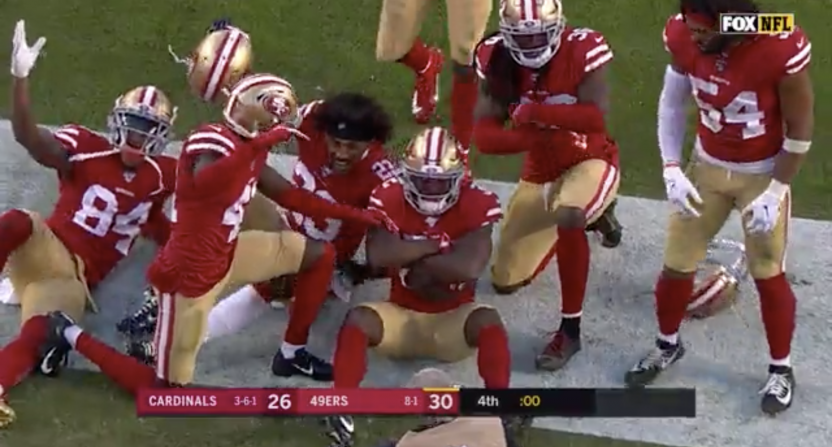 The end of the Cardinals-49ers game could be used as a sign for someone to stop gambling. Imagine, you bet on the Cardinals at +9.5, they’re leading by 3 with 38 seconds to go. Even if Jimmy Garoppolo and the 49ers pull off a great game winning drive, it won’t matter because Arizona will either score and win or San Francisco would get the ball and run out the clock so you’re set either way. That was until a complete gambling nightmare unfolded over the last 38 seconds.

After Garoppolo took the 49ers into the end zone for the go-ahead touchdown, the Cardinals had to go the entire field in around 30 seconds if they were looking for the W. Everything still looked good for those who had Arizona. With 2 seconds left, and the Cardinals needing to go 78 yards for a touchdown, they needed to go with a wild multi-lateral play in hopes of confusing the defense and sneak out a win. That didn’t happen and things went from bad to worse for the Cardinals and for those who bet on them.

Line was Niners -10. They were losing with 40 seconds to go and then this. Worst bad beat I’ve ever seen pic.twitter.com/UG6vc8yB6P

Things started to go off the rails when Larry Fitzgerald threw a wild lateral across the field. And then in the dogpile, someone flipped the ball about 15 yards backwards where a few San Francisco players did some sort of “Holy Roller” routine as D.J. Reed Jr. strolled into the end zone.

That score made it a 10 point 49ers victory and the spread at many sportsbooks was 49ers -9.5 so they covered by half a point. Some sportsbooks had -10 so you had a push at those places. If I had money on the Cardinals and I saw what was happening, I might think twice about making another bet for a while. If you had the 49ers, you thought you were out, and suddenly you had a new lease on life, congratulations on the win and riding one helluva wave of emotions.