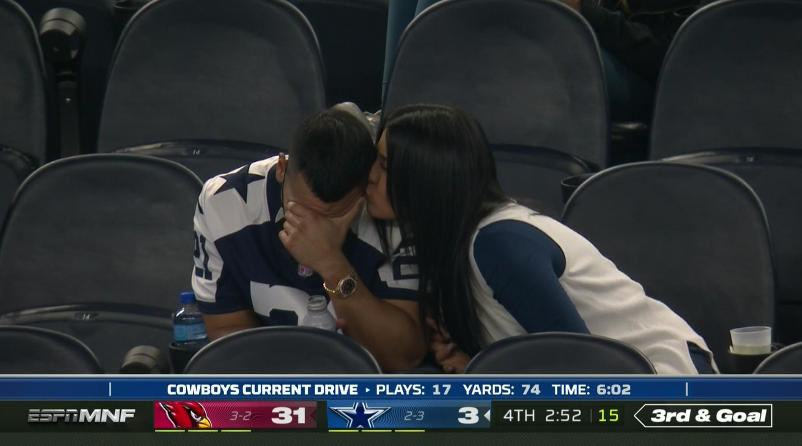 It appears that the Dallas Cowboys will miss Dak Prescott even more than we (and especially Tony Dungy) thought. The Cowboys were shellacked 38-10 by the Arizona Cardinals on Monday Night Football at AT&T Stadium. It was a total laugher, with the Cowboys’ only touchdown coming with under three minutes remaining.

Andy Dalton was brutal in his first start for Dallas, completing 34-of-54 passes for 266 yards (4.9 AVG), one touchdown, two interceptions, and with a 65.8 passer rating.

And the Dallas running game wasn’t much better, with Ezekiel Elliott running for 49 yards and fumbling twice.

The ball is loose again!

Cardinals recover their second fumble of the game. #RedSea

It definitely doesn’t help that the Cowboys’ offensive line is in shambles, and first-year head coach Mike McCarthy continues to make questionable decisions.

The Cowboys replacing Jason Garrett with Mike McCarthy has been very underrated from a comedy perspective https://t.co/YVWl5FIONQ

So, the Cowboys stunk and have big-time problems. But on the other side, it was a terrific performance by the Cardinals.

The Arizona defense was active and opportunistic at every level. Offensively, the Cardinals’ running game shredded the Cowboys’ defense, taking 35 carries for 261 yards (7.5 AVG) and three touchdowns. This Kenyan Drake 69-yard rushing touchdown was the perfect way to cap the game off:

Kyler Murray only completed 9-of-24 passes for 188 yards, but he threw for two touchdowns and didn’t turn the ball over (additionally, he ran for 74 yards with a touchdown). One of his scores was an 80-yard touchdown reception by Christian Kirk:

Kyler Murray 80-yard 💣TD pass to Christian Kirk. Cardinals pouring it on with a 21-0 lead over the Cowboys in the 2nd quarter. pic.twitter.com/5NhhYZ44DF

Arizona (4-2) is a team on the rise that looks like a playoff contender (and potentially a very dangerous team if they keep getting better, which certainly seems possible in Murray’s second season).

The Cowboys look absolutely terrible, but then again so does the entire NFC East. At 2-4, the Cowboys are incredibly in first place.

The NFC East has a collective record of 5-18-1 through Week 6 😬 pic.twitter.com/A3HODbOPce

Even with all of the Cowboys’ massive flaws, they should remain in the division race all season long. Now, that says more about the other three teams than it does the Cowboys. The Eagles have been bad, and they now have injuries to keep players like Miles Sanders and Zach Ertz. The New York Giants (they could’ve really had a chance in this thing with  a healthy Saquon Barkley) and Washington Football Team are awful.

It’s easy to see the NFC East champion winning under seven games, and they’ll get to host a playoff game as the No. 4 seed.

NFC East: Cowboys 2-4, Eagles 1-4-1, Giants 1-5, Washington 1-5. One of those teams will host a playoff game, likely against the Packers, Bears, Saints, Buccaneers, Seahawks, or Rams.

And the Cowboys still have six games remaining against these teams, including the next two weeks: at Washington in Week 7, at Philadelphia in Week 8. It seems hard to believe at the moment, but the Cowboys have a great opportunity to become clear division favorites quickly.

The Cardinals will have a much bigger challenge when they host the undefeated Seattle Seahawks in Week 7.