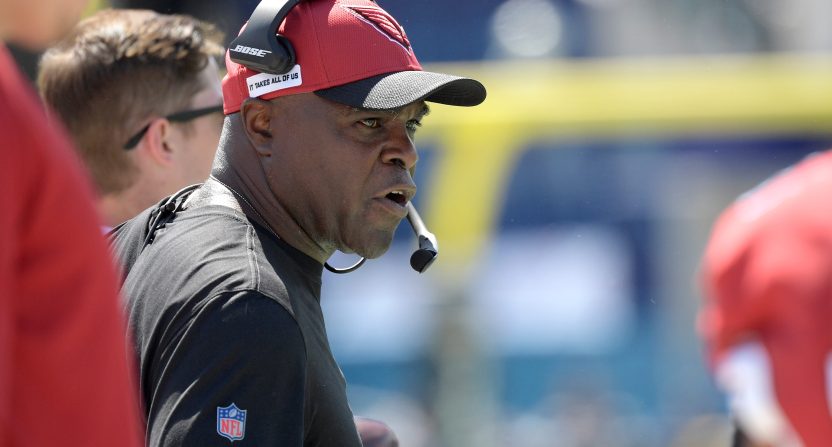 Some disturbing reports emerged on Friday regarding Arizona Cardinals running backs coach James Saxon, who was involved in a domestic battery case back in May.

The details of the case are quite graphic and horrific, with Saxon being charged with a Level 6 Felony of allegedly assaulting a woman in front of a child younger than 16-years-old in an incident that started at an Indianapolis area Costco and then continued at the home of the woman.

His scheduled trial date is on August 25th, but this case has now impacted his role within the Cardinals organization.

Up until Friday, Saxon has remained with the Cardinals through training camp, but head coach Kliff Kingsbury revealed to the media after team practice on Friday that Saxon has been placed on administrative leave.

The Cardinals have put RB coach James Saxon on administrative leave, the team said in a statement.

The team also released a statement regarding Saxon, saying that the matter is “under review pursuant to league policies.”

“We are aware of the incident and notified the NFL as required,” the statement said via Josh Alper of Pro Football Talk. “The matter is currently under review pursuant to league policies. After consultation with the league office, James has been placed on paid administrative leave. We will have no further comment pending additional proceedings.”

It has truly been a disastrous offseason for the Cardinals organization after the whole Kyler Murray contract saga, where he initially had a clause in his new contract extension that forced him to undergo four hours of film study per week which caused a ton of controversy.

Now they have this looming situation regarding a truly disgusting case involving one of their coaches, which is certainly not a good look for the organization.

It remains to be seen what the Cardinals will ultimately do regarding Saxon moving forward, but it may be in their best interest to cut ties with the coach if he is found guilty of these crimes later this month.