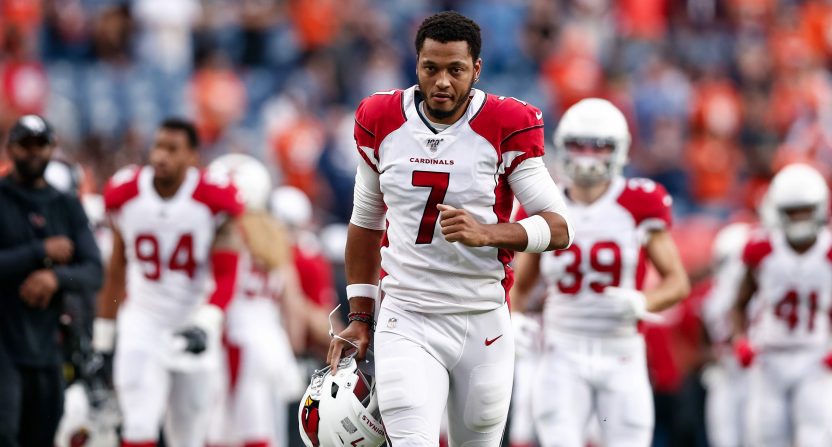 Arizona Cardinals quarterback Brett Hundley has been sued by his ex-wife, “who claims he repeatedly attacked her before and during their marriage,” according to TMZ.

The accuser — using the alias “Jane Doe” in the lawsuit, but identified herself as Hundley’s former wife — is suing Hundley for battery, domestic violence, emotional distress, and negligence.

There are three alleged incidents of Hundley being violent toward her from 2016-2017, while he played for the Green Bay Packers. Via TMZ:

— In January 2016, the woman claims Hundley choked her and threw her around their bedroom during a heated argument … only letting up when she told him, “I can’t breathe.” The woman claims she suffered mental trauma and a broken ankle — but the lawsuit does NOT say if she ever went to police.

— In December 2016, the woman claims they had another argument where he pushed her through an open garage door. She claims she suffered a back injury.

— In March 2017, she claims Hundley charged at her during an argument and threw her onto a pool table and repeatedly shoved her against it. In this case, the accuser claims two men overheard the incident and called police.

Additionally, the woman claims that Hundley “gave her an STD during their marriage — the result of alleged extramarital sexual activity,” according to TMZ.

The Packers selected Hundley in the fifth round of the 2015 NFL Draft after he starred at UCLA. He spent three seasons with the Packers, throwing for nine touchdowns and 13 interceptions, with a 67.9 passer rating over 15 games played. In 2017, he started nine games for Green Bay while Aaron Rodgers was out due to injury.

Hundley, 26, was traded to the Seattle Seahawks before the 2018 season, and the Phoenix native returned home to sign with the Cardinals in 2019.

Update: Hundley is denying the allegations. Here’s what his attorneys told TMZ:

“She threatened to file this lawsuit (three years after her most recent alleged event) unless the sum of $750,000 was paid by Brett. This is IN ADDITION to over one half a million dollars she stands to receive from their brief 2-1/2 year marriage and the $13,000 a month she received for spousal support.”

“She also begged Brett to reconcile as recently as September 2019 to which he was not interested.”

“Brett is known for being of SOLID character. We will absolutely defend Brett’s character against this malicious effort to extort him and/or disparage his excellent reputation.”

“Brett will be responding with a Cross Complaint … for Malicious Prosecution, as well as a claim against her counsel … for a baseless lawsuit that is among other things TIME BARRED.”