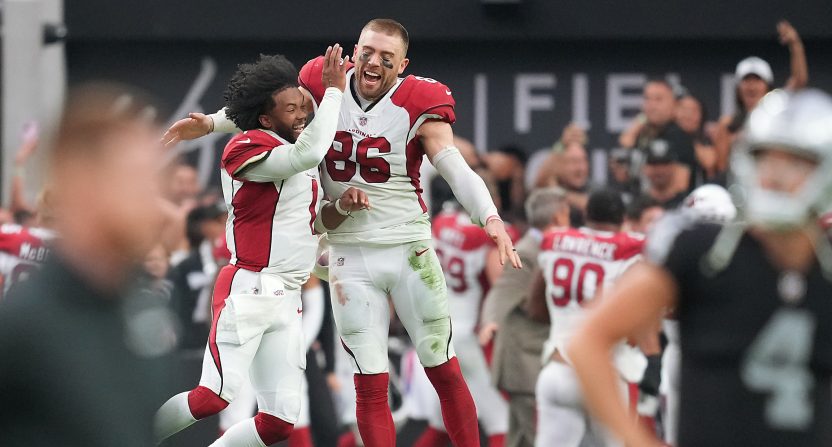 After pulling off a tremendous comeback to get the game into overtime, it seemed like the Arizona Cardinals would still fall to the Las Vegas Raiders. Vegas had the ball, a first down and was in Arizona territory. But in one play, a likely loss turned into a sudden win.

Derek Carr completed a quick pass to Hunter Renfrow, who broke an initial tackle but was off balance when he ran into his former Clemson teammate, Isaiah Simmons. Renfrow fumbled for the second time on the possession. The first one was recovered by Raiders tight end, Foster Moreau. This time, Renfrow was not so fortunate. Cardinals cornerback Byron Murphy Jr. scooped the fumble up and sprinted 59 yards for the score.

SCOOP AND SCORE FOR THE WIN!

Murphy did come dangerously close to throwing the ball away before he crossed the goal line but the touchdown was upheld.

The win was truly remarkable. Las Vegas led 23-7 heading into the fourth quarter. Arizona scored to cut the deficit to 23-13. Kyler Murray successfully ran for the two-point conversion on a play that took nearly 21 seconds to complete.

For reference, the entire the men’s 200-meter dash at the Tokyo Olympics was completed in less time.

Murray then scored on the final play of regulation to cut the deficit to 23-21 and fired a tremendous pass to A.J. Green to tie the game on the two-point conversion.

From Murray’s performance to get the game into overtime to what happened in overtime, the NFL world was going crazy over this wild game.

Kyler Murray coming into Overtime for the Cardinals vs the Raiders: pic.twitter.com/iL00wASlKA

Did that just happen?

Style points don’t matter for the Cardinals right now. Scratch out wins by any means necessary until D-Hop gets back.

This is why you wanted to give Kyler Murray $200+ million.

The Cardinals ended up winning this game… pic.twitter.com/SLMrODn3Pu

It hasn’t been a smooth path for the Cardinals for the first two weeks of the 2022 season. But like all of its NFC West rivals, the Cardinals are 1-1 after two games.