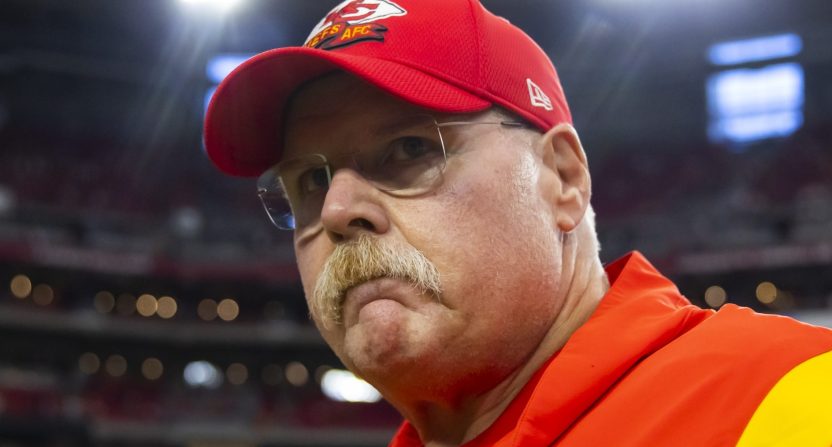 During Sunday afternoon’s season-opening showdown with the Arizona Cardinals, Kansas City Chiefs head coach Andy Reid blamed the Cardinals’ turf for injuries to kicker Harrison Butker and cornerback Trent McDuffie. But a day later, Arizona is denying the field conditions had anything to do with it.

Reid claimed that the turf was “loose” due to a recent resodding of the entire field. But a Cardinals spokesperson said that while the field was resodded, there was plenty of time for the field to take root and it should not have been loose.

“The entire field was replaced on Monday, August 22nd — the day after the last home preseason game vs. Baltimore — so it had it almost three full weeks before the Week One game vs. Kansas City,” Cardinals spokesman Mark Dalton told Pro Football Talk. “That’s more than enough time for the Tifway Bermuda 419 hybrid sod to take root, especially in 109 degrees and abundant sunshine.”

Dalton also pointed out that Arizona’s field conditions are consistently among the best in the entire NFL.

“The field at State Farm Stadium is routinely ranked among the best — if not THE best — among NFL players, including in surveys conducted by the NFLPA,” Dalton said. “Like all fields, the surface at State Farm Stadium undergoes the NFL’s required testing and certification process both before and after games. Sunday it not only met but exceeded those standards.”

While the full extent of their injuries is not fully known, the Chiefs did place McDuffie on the IR, meaning the rookie first-round pick will miss at least four games. It’s also looking unlikely that Butker will play against the Los Angeles Chargers this week.