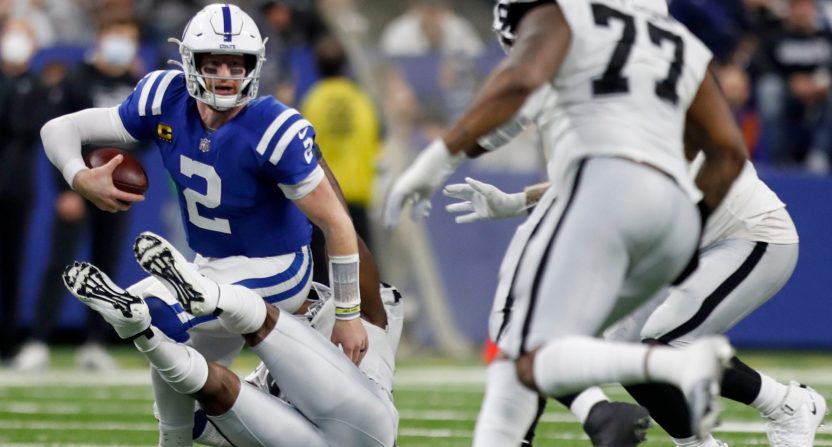 Early in the week, it was up in the air whether or not Indianapolis Colts quarterback Carson Wentz would play in their Week 17 matchup against the Las Vegas Raiders after testing positive for COVID-19. Wentz was cleared to play Sunday morning after isolating for five days based on the updated NFL protocols.

The quarterback missed a week of practice and it certainly showed early on in their game. The Colts only put up 10 yards of offense in the first quarter in an extremely sluggish start. After getting down to a 10-0 deficit in the first quarter, it was too much to overcome and the Colts suffered a 23-20 defeat at the hands of the Raiders.

Wentz finished the game with only 148 passing yards on the day and the Colts put up less than 300 total yards of offense. The quarterback was off all day and missed numerous receivers, including a big throw in the fourth quarter to Colts wide receiver T.Y Hilton that could have helped keep them in it.

Still can’t get over this miss from Carson Wentz. Rushed this throw for no reason, which led to bad mechanics, and overthrew T.Y. Hilton. If this is on the money, #Colts score soon after. pic.twitter.com/LXoyC4Kwd0

“Definitely one of the weirdest weeks of my NFL career if not the weirdest,” said Wentz to the Associated Press. “But we’re good, locked in the virtual meetings. Just different, wouldn’t say that’s the reason for the performance or the reason we lost today by any means. Just a strange, strange week.

“Obviously, it’s always great to get every rep you can but at this time of the year, you lean on accumulated reps when you have to,”  said Colts head coach Frank Reich. “It’s not uncommon for players this time of the year to miss a lot of practice time. It happens all over the league at all positions. For all of us, those players, whoever they are, have to find a way to come in and still play well.”

The Colts will need Wentz to have a better performance next week against the Jacksonville Jaguars as it is a win-and-in scenario to get into the playoffs. They currently hold the 6th seed in the AFC and will look to repeat their Week 10 victory over the Jaguars to finish out the season.