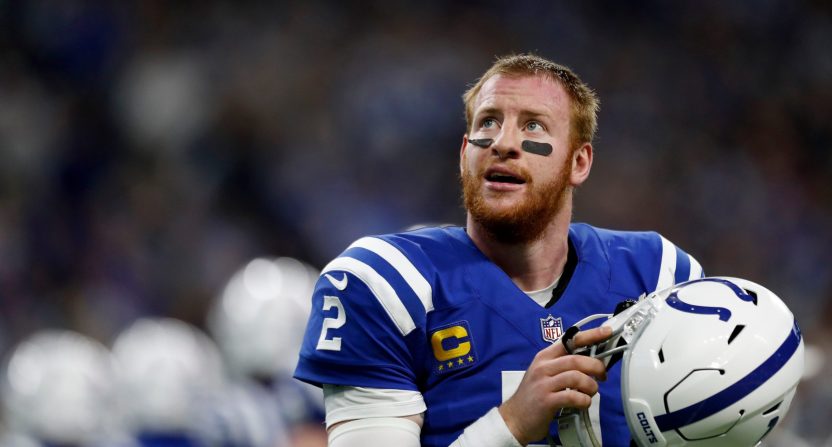 What we didn’t know was they were both working to solve each other’s problems. According to Adam Schefter, the Commanders and the Colts have completed a trade that will send Wentz to Washington for “a package of picks.” Schefter later noted that they would be taking on “his full contract” as well, which pays him over $26 million per year through 2024, showing just how badly the Commanders wanted to get their guy.

Washington is taking QB Carson Wentz and his full contract, per sources. https://t.co/Augnm5FnDL

Wentz came to the Colts before last season in a trade with the Philadelphia Eagles and was seen as an opportunity for both the franchise the quarterback to get a new lease on life. However, while the Colts had a lot of talent on their roster, Wentz couldn’t quite get them to the next level. He threw for 3,563 yards, 27 touchdowns, 7 interceptions as the Colts finished the season 9–8, losing to the lowly Jacksonville Jaguars in the final game with a playoff berth on the line.

After the season, neither head coach Frank Reich nor GM Chris Ballard would commit to saying Wentz was their guy for next season, and it appears that they were not kidding. Even owner Jim Irsay never seemed sold on the QB, especially after it came out that he would not get vaccinated.

For Wentz, it was a failure to succeed where he had failed in the past with Philly and his reputation for being unable to win when it matters most is going to follow him now to Washington. His legacy in Indianapolis might be for what fans (and his teammates) will consider a wasted year and a lost draft pick as part of the deal with the Eagles due to Wentz’s high snap count.

It’s been no secret that the Commanders have been reaching out to everyone to find their next quarterback. A proposed deal for Russell Wilson went nowhere and earlier today it was reported they had an interest in Jameis Winston. However, it sounds like they’ve found their guy in Wentz, at least for now, though they’re certainly paying a steep price for a guy who has yet to prove himself a capable playoff signal-caller.

Washington is paying the full $28 million due to Carson Wentz this year, which includes a $5 million roster bonus due next week.

From now on, it's Commander Carson.

The most obvious quirk in his Commanders spot is that Wentz will have to face the Eagles twice a season now, including a trip to Philadelphia. We can only imagine how that’s going to go. But in the meantime, the reactions on social media from Washington fans and the NFL world has been about as unkind as it gets.

This is not how to Build Back Better. https://t.co/Re9kkNV7Gi

the year is 2032. carson wentz is a starting QB for his 31st team for no reason https://t.co/muLhlQn1al

Yet! Nobody has the indescribable quality of being able to make football utterly joyless in the very specific way Carson Wentz does

Carson Wentz and Ben Simmons both wound up on teams in Philly’s division, this is the moment Philly fans have been training for all these years

This is great for the Eagles, they’ll be catching passes from Carson Wentz again.

Good luck, Commander Carson. You will most certainly need it.