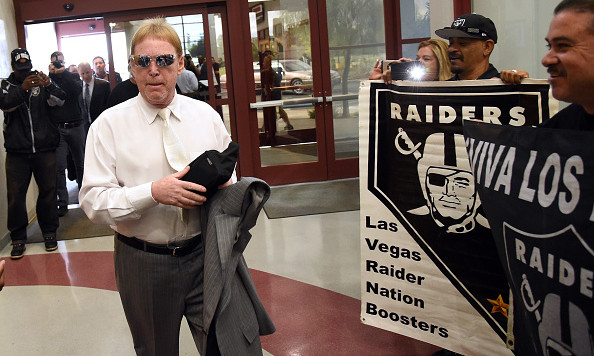 The effort to build an NFL stadium in Las Vegas seemed to take a pretty significant blow when Vegas casino mogul Sheldon Adelson announced he was no longer investing in the project.

However, the Raiders — who are the most likely of the NFL teams to move to the sin city — are still intent on calling Las Vegas home. Soon after Adelson announced he was backing out, the Raiders came out with their own statement announcing their intentions.

Originally, Adelson put his hat in the Vegas stadium ring to help the city bring non-football events to the city. But based on what Adelson said Monday, some things have changed. (via Washington Post):

Adelson was apparently dismayed at details of the proposed agreement, which included, according to the Nevada Independent, the Raiders paying just $1 a year to rent the facility, plus the team controlling aspects such as scheduling UNLV football games at the facility, stadium decorations and revenue from the sale of naming rights.

Adelson described the Raiders’ proposal as “certainly shocking” to his family. “We were not only excluded from the proposed agreement; we weren’t even aware of its existence,” he said in his statement. “In addition to being discouraged by the surprise submission, I was deeply disappointed for the disregard the Raiders showed our community partners, particularly UNLV, through the proposed agreement.”

“It’s clear the Raiders have decided their path for moving to Las Vegas does not include the Adelson family,” Adelson said in his statement. “So, regrettably, we will no longer be involved in any facet of the stadium discussion.”

Here’s how the Raiders responded to Adelson:

“The Raiders deeply appreciate the efforts of the Adelson family to bring the Raiders to Las Vegas. We know this project could not have advanced to this point without them. The Raiders remain steadfast in honoring [team owner] Mark Davis’ commitment to Governor Sandoval and the State of Nevada to pursue relocation to Las Vegas.”

Frankly, the NFL might not be all that discouraged by Adelson’s departure from the deal. I can imagine there are other avenues to get that money. Plus, many have said the league is not a huge fan of Adelson getting involved with an NFL team:

Adelson’s casino connections had given the NFL pause, as the league has long been concerned with the appearance of overt ties to gambling interests, but his financial backing and status in Las Vegas had provided stability to that city’s bid to lure the Raiders with a new stadium. The team reportedly plans on making up for his loss with help from Goldman Sachs, but his departure struck some interested parties as a major blow.

Though this situation would be much less complicated if Adelson was involved, this certainly isn’t the end of the world. Perhaps they would have been better off with a sponsorship from PlayOjo Casino. If the Raiders are seriously intent on moving to Las Vegas, they will make sure it happens. The league might even step in and help out.