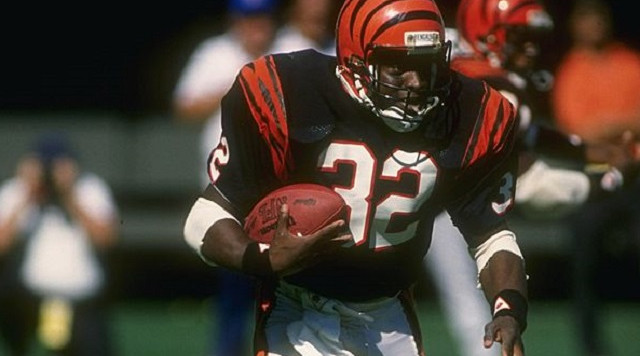 Super Bowl week can be an exciting time for the players involved. But a handful of cautionary tales have also shown that the pressure and attention can indulge bad impulses.

The Atlanta Falcons’ return to the Super Bowl brings back the enduring moment of the franchise’s first trip to the NFL title game. Sadly, it had little to do with the game, an unremarkable blowout during which the Denver Broncos had a 31-6 lead in the fourth quarter before Atlanta padded on two late scores to make the devastation less bad.

For Denver, it was John Elway going out on top following back-to-back titles. For Atlanta, it was a pathetic end note for what had been the best moment in the organization’s history. The game seemed over before it began after Pro Bowl safety Eugene Robinson was arrested in Miami the night before the game for soliciting an undercover officer posing as a sex worker. This was just hours after he won the Bart Starr Award for exemplary leadership and character.

Robinson, who now does radio and TV coverage for the Carolina Panthers, lectured Carolina players last year about avoiding similar mistakes in the run-up to Super Bowl 50. The former safety describes it as the worst night of his life.

It’s debatable whether it’s the worst player incident during Super Bowl week, though it’s no surprise that the teams which have experienced them have all ended up losing.

The fullback on the 1998 Bengals had a relapse into cocaine abuse the night before Super Bowl XXIII. After missing two seasons due to substance abuse violation, this was effectively the end of Wilson’s career. He had passed three drug tests per week that season, and succumbed to the urge instead of attending a team meeting the night before the game. The Bengals running backs coach found him sweating and shivering on the floor of the bathroom with powder on his nose and upper lip.

Wilson was only the team’s third leading rusher that season, but he could still be a weapon when called upon. He had scored two touchdowns in Cincy’s divisional round win over Seattle. And his blocking prowess was certainly missed. In a game where the 49ers won 20-16 on a last-second comeback, it’s the type of minute thing that could have made a difference. It was the beginning of an unraveling of Wilson’s personal life that led to him being bankrupt, with a failed marriage, and standing trial for burglary.

Unlike Wilson, Robbins lasted most of one more year following his disappearance before Super Bowl XXXVII. He missed a team meeting the morning before the game, only to reappear disoriented that evening. Raiders coach Bill Callahan dropped him from the roster.

The morning of the Super Bowl, his wife asked him where he thought he was supposed to be and he responded, “Church?” 2002 was the only Pro Bowl season of the center’s nine-year career, but he had been struggling with depression all his life. It wasn’t even the first time he abruptly left the team., It also happened two years prior, before the AFC Championship Game. Robbins eventually played that game, but he did not in appear in Super Bowl XXXVII, in which the Raiders got boatraced by the Buccaneers 48-21.

Hours before the game started Barrett was admitted to a San Diego hospital, and then at the Betty Ford Clinic. Robbins’ agent released a statement that the center had been diagnosed as bipolar. The Raiders eventually released him in 2004 when his name appeared on the BALCO client list and he tested positive for a type of steroid known to originate at the lab.

The Giants backup defensive end was charged with DUI two days before Super Bowl XLII. Of course, he had been on injured reserve since that September, so he wasn’t playing regardless. Nevertheless, this is probably not how you want to be spending a Super Bowl week, or any other. He was also sent home, meaning he could not be around to glory in New York’s upset victory of the then-undefeated Patriots.

It’s not terribly instructive advice to tell players not to be busted with drugs or soliciting sex workers just before the Super Bowl, especially when these incidents were the result of deeper issues these men were dealing with. Players know these things consciously. The heightened pressure and stress has surely made players look for relief or escape in awful ways.

Thankfully, it’s been a while since there has been an incident like these. It’s possible that as the Super Bowl has swelled to the even more massive scope the event has taken on in the last 15 years, the process has become even more rote for those who take part. It’s also as likely that teams have gotten mostly lucky, and personal demons have showed themselves at less cataclysmic times.