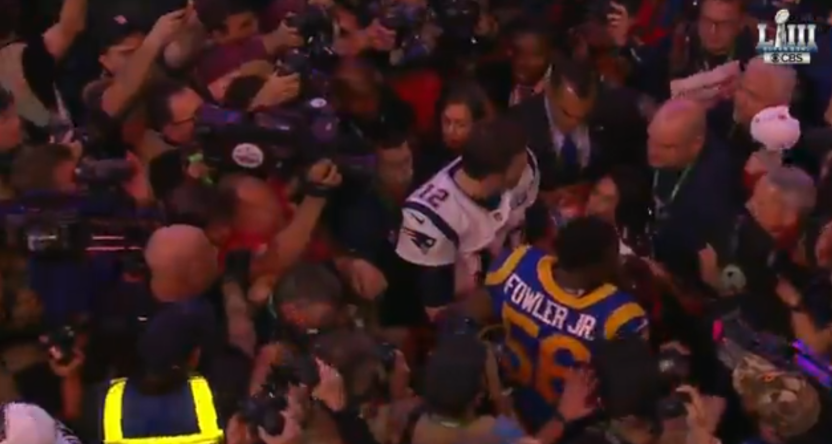 After the New England Patriots won Super Bowl LIII 13-3 over the Los Angeles Rams  Sunday, CBS’ postgame ceremony coverage went off the rails very quickly. Jim Nantz tried to throw it down to sideline reporter Tracy Wolfson for an interview with Patriots’ quarterback Tom Brady, but Brady shrugged her off to exchange hugs with a couple of Rams’ players, then teammate Julian Edelman. And then there was a giant crush of people, a lot of yelling, a “Jesus, are you okay?!”, and other weirdness before Wolfson finally got to do her interview.

Here’s how it played out, starting with the throw to Wolfson (with some audible but indistinguishable noise from those around her):

Here’s Wolfson trying to start the interview and saying “It is just insane down here,” Brady putting her off for embraces, and her narrating the embraces with Rams’ players:

Here’s Wolfson narrating the next embrace, with Patriots’ receiver Julian Edelman, and then someone yelling “Behind you, behind you!” and “Out of the way!”, then the CBS microphone being passed out, a “You okay?”, and a cut to a hallway shot of Rams’ players:

CBS then returned to an overhead shot of the scrum with a lot of indistinguishable noise and shouting, and a “I have him, I have him!” from Wolfson (which presumably was meant for the broadcast’s internal discussion rather than the broadcast itself):

And the crush then continued, with Brady embracing owner Robert Kraft, a whole lot of people yelling, and a “Jesus, are you okay?”

Finally, Wolfson got to do her interview. Here’s her first question and Brady’s response:

It became a pretty standard interview from there, but it certainly was an unusual way to get to that point. It’s unclear exactly what happened here and why so many people were allowed to get in so close to Brady during this attempted interview, but it definitely was an odd broadcasting moment.