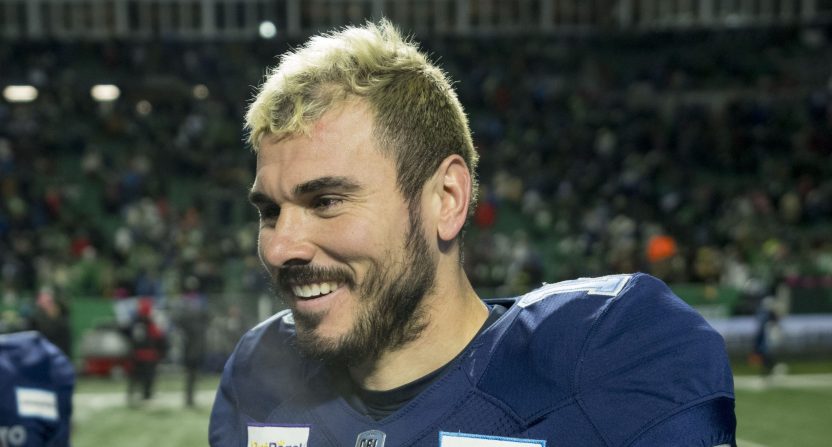 You gotta hand it to Chad Kelly. No matter what the stat sheet might say, he’s the best guy on the field in his own mind.

The nephew of Buffalo Bills legend Jim Kelly and former Ole Miss star is coming off a Grey Cup victory as a member of the CFL’s Toronto Argonauts. While Kelly is currently the backup quarterback for the team, he entered the game in relief of injured starter McLeod Bethel-Thompson in the fourth quarter and set up a key touchdown to secure the win.

Where does Kelly go from here? It remains unclear, but when asked if he still has what it takes to start in the NFL, he made it clear that he has absolutely no doubt about it.

“50 percent,” said Kelly when asked how many current NFL starters he is better than during an appearance on the Pardon My Take podcast. “This is what I think. Obviously, there’s a lot of off-the-field stuff, right? We all know about it. It’s all been publicized. You know, you stick a camera in a kid’s face at eight years old and give him his own day, you know, that’s predominately what’s going to happen, is that the light is going to shine a little brighter when it’s good or bad, right? But I think people mistaken my on-the-field capabilities of thinking clearly, right? Because they see that I do some dumb things off the field.

“So I think that with my saying 50 percent, I feel like I know the game a lot more than a lot of people because I started at such a young age, and that’s all I knew. In order to, you know, make it in life, I thought it was just to play in the NFL, really not even play in college. It was to play for the Buffalo Bills or someone, you know? That was the main focus my whole life.”

Kelly, who initially played for Clemson before being dismissed from the team, spent a year at East Mississippi Community College before reemerging at Ole Miss and performing well enough (aside from plenty of drama) to become Mr. Irrelavant in the 2017 NFL Draft when the Denver Broncos selected him with the very last pick. He spent two seasons with the Broncos but was released following his arrest on suspicion of first-degree criminal trespassing in 2018. He resurfaced with the Indianapolis Colts but never saw the field in his two seasons with them. He spent 2022 with the Argos in the CFL, appearing in 18 games and starting one.

Perhaps Kelly will be able to parlay his situation into another shot with an NFL team, but for now, the only person who thinks he’s got a shot at starting over half of the current quarterbacks there is Chad Kelly.