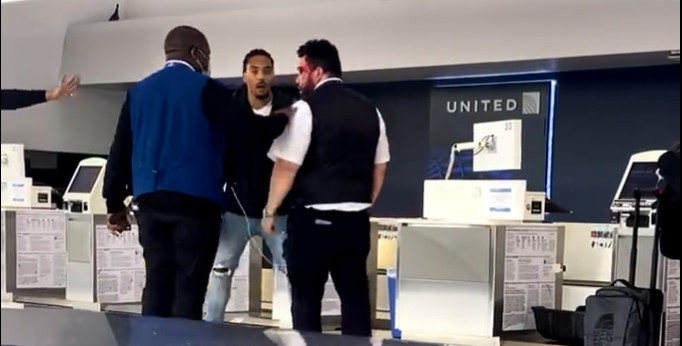 A major altercation with a United Airlines employee at New Jersey’s Newark International Airport Monday morning has now led to CFL receiver Brendan Langley being arrested and charged with simple assault. Here’s video of that fight from TMZ:

Here’s another angle that quickly spread around Twitter Monday:

Both videos start in the middle of the altercation, with the TMZ one starting slightly earlier, and some of what happens is obscured by the angle. But the employee does appear to at least push Langley. Langley then responds with what looks like an open-handed slap and several closed-fist punches, knocking the employee down. The employee gets back up and Langley hits him again. Langley then looks off to the side at someone yelling at him, and the employee then hits him and pushes him; that leads to Langley yelling “You saw that shit?” and throwing some further punches, one of which knocks the employee down and leaves him bleeding. The employee then gets back up and comes towards Langley, who yells “You want some more? You want some more?” Other people then walk over to try and intervene, and the video ends. As per TMZ, Langley was the only one arrested out of this:

Witnesses say the 2 began arguing before pushing, slapping and ultimately punching each other.

7:05 AM PT — Law enforcement tells us the passenger was arrested, not the employee … despite the passenger’s claim he didn’t throw the first punch.

8:39 AM PT — Cops tell us the passenger, ex-NFL player Brendan Langley, was arrested and charged with simple assault.

The video certainly seems to show Langley making much more impactful contact than anything the employee does. However, it’s far from conclusive on the origin of the altercation. Witness testimony and other angles will likely be important there if this case proceeds, either with criminal charges or with a potential civil lawsuit.

Langley, who signed with the CFL’s Calgary Stampeders in February as a receiver, started his college career as a defensive back at Georgia, then transferred to Lamar University for two further NCAA seasons. He was a third-round pick in the 2017 NFL draft by the Denver Broncos. He played with the Broncos from 2017-19 and converted to receiver while on their practice squad in the 2019 offseason, but was cut that August; he also had a short practice squad stint with the Seattle Seahawks in January 2020.

It’s unclear as of now if this will affect Langley’s CFL employment. In the past, CFL teams have continued to employ some players while they faced American or Canadian criminal charges, but they’ve also cut other players as soon as charges or even accusations showed up. And generally, it doesn’t take much for a team to decide to cut a relatively-unheralded signing, especially one who’s coming in at a position he hasn’t played much.

It’s notable that there are two potential sources of CFL punishment, too. The team could cut Langley themselves,  or commissioner Randy Ambrosie could not only force a cut, but also ban other teams from signing Langley (that’s rare, but it has happened). So this may wind up ending Langley’s CFL career before it really got going.